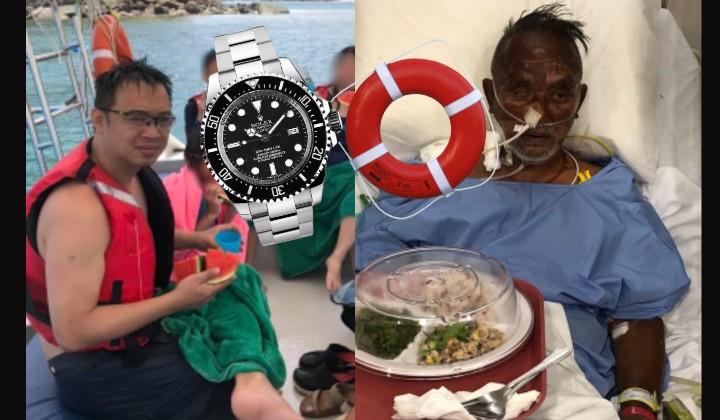 Anyone else remember that Tom Hanks movie, Cast Away?

Itâ€™s the one where he was stranded in a desert island for four years with only a volleyball, which he named Wilson, as his friend.

Well, looks like the movie has come to life for a Singaporean man who was lost at sea for four days with only his watch and a life buoy to talk to.

A diving enthusiast, John Low (not Jho Low ok, guys) was on his way to Tioman Island last month when his boat ran out of fuel and sank in a sudden storm.

Managing to grab a life buoy before the boat sank, it became his close friend in the 80-hour ordeal. To keep his sanity intact, John kept talking to the life buoy he named â€œBoyâ€ and also his Rolex Mido Commander watch called â€œBrotherâ€.

â€œWhen you are out in the sea alone, every object becomes your friend,â€ he told The Straits Times. â€œIf you watched the movie Cast Away, what is shown in the movie is exactly what I experienced.â€

Staying sane wasnâ€™t his only challenge though, 40 hours
after sinking he had to take off his clothes because it was too painful against
his badly sunburnt skin.

When he tried to cool down by putting his body underwater, it was an excruciatingly painful experience and his skin would peel off.

Floating naked in the sea, he could feel fishes rubbing and biting his body, but he couldnâ€™t see them or do anything about it. Plus he was exhausted from constantly vomiting after drinking seawater to stay hydrated.

Just as he was about to give up on the fourth day, a passing
ship spotted him in the water and rescued John.

When the shipâ€™s crew found him, he was burnt to the colour of coffee, arms were stuck to â€œBoyâ€ and there was no more skin from his armpits to elbows.

The 60-year old man was then airlifted home by the Republic of Singapore Air Force (RSAF).

Thankfully, he has recovered from the life-threatening experience after spending a week in ICU at Singapore General hospital.

Unfortunately, we have no idea what happened to â€œBoyâ€ and â€œBrotherâ€. It appears that John may have had to â€œwaveâ€ them goodbye.

Moral of the story:

1. Donâ€™t drink seawater because it will dehydrate you faster.

2. Learn to make new friends even when youâ€™re all alone in a life-threatening situation.