This herb is often used for Laksa and Kerabu, but turns out you can also eat bunga kantan as a snack! 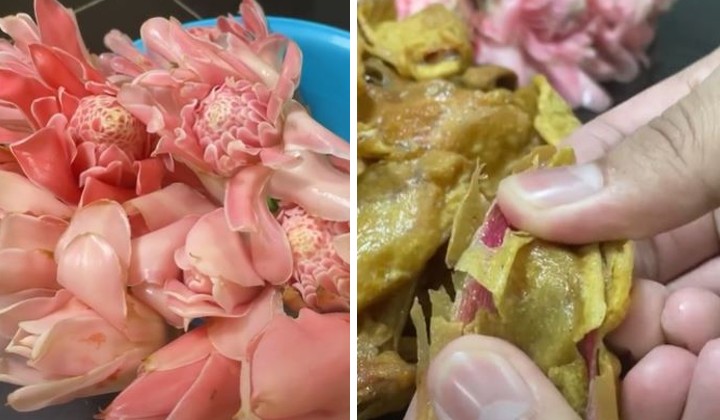 If you’re Malaysian, then Bunga Kantan is no stranger to you.

Also known as the Torch Ginger, Bunga Kantan is the pink flower that’s used in Malaysian cooking such as for Laksa, Asam Pedas, Nasi Kerabu and Ulam. Although the pink variant is the most common, they also sometimes come in red or white!

They have a sweet, floral and ginger-like scent as the name suggests and taste sweet and sour with shades of piquant citrus flavours. Believe it or not, other than in culinary, they are also used for medicinal and ornamental purposes (they can be made into fresh cut flowers).

Besides thinly slicing them up to put into Assam Laksa or Kerabu, did you know the petals of the flowers can be fried and made into crackers? We didn’t either!

Recently, a TikTok food vlogger @Ikmalzulkifli_ made an unusual recipe for Torch Ginger crackers. It’s sort of peculiar as we never heard of these kinds of crackers before but this could actually work.

In his video, he introduced the fully bloomed beautiful pink flowers that he got from his garden and explained that you should only get the thin petals, not the hard ones as those are hard to chew.

He plucked the long thin petals and soaked them in water to rinse them. He also advised boiling the petals a bit first in his caption, probably to further soften the waxy and hard petals.

After that, he then showed his way of making the frying batter which includes flour, soup seasoning, an egg and water. He practically said to use your imagination for the batter as long as it tastes good. Classic Malaysian ‘campak-campak’ (throw whatever you want as long as it’s good) recipe.

After mixing the batter, he dipped the petals in to fully coat them. Just make sure the batter is thick and not too runny as it might not coat the petals fully and affect the crunchiness of the crackers.

Finally, he fried the coated petals in hot oil and the dish is ready to be served. He asked netizens to give it a try and guess for themselves if it’s good or not.

Netizens were intrigued by this recipe and not at all weirded out. They did wonder if it’s good or not and the creator replied that it’s actually good given you pick the soft ones. He also said that this could also be eaten with Nasi Kerabu, the famous east coast Malaysian dish.

One user even joked that this cracker must taste like Laksa, our rice noodle with thick gravy staple Malaysian dish.

Others expected this to smell really nice but with a hefty price for the main ingredient. Bunga Kantan is quite expensive as one stalk will cost you around RM3. To make this dish would require quite a few stalks and it could be an expensive dish at the end of the day. The creator agreed with this and joked that they should plant this flower in their gardens ASAP.

If you’re one of those daredevils who like to try new things, give this intriguing recipe a try. What does it really taste like to eat a fried flower? Who knows, this could be the next go-to snack to eat with your family.