The Archbishop was unwavering in his support for the struggle of the oppressed all over the world. 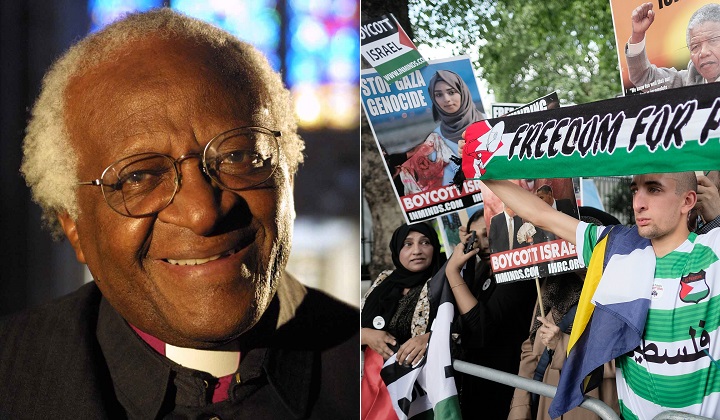 On Sunday 26th December, Archbishop Emeritus Desmond Tutu died at the age of 90. The extent of his influence on global affairs is reflected by the number of tributes that poured in from all over the world, including from notable figures such as Queen Elizabeth II, British Prime Minister Boris Johnson, US President Joe Biden, ex-president Barack Obama, and U.N. Secretary-General António Guterres. The latter’s description of the archbishop is reflective of all the sentiments towards him:

“Archbishop Tutu was a towering global figure for peace and an inspiration to generations across the world. During the darkest days of apartheid, he was a shining beacon for social justice, freedom, and non-violent resistance. … Although Archbishop Tutu’s passing leaves a huge void on the global stage, in our hearts, we will be forever inspired by his example to continue the fight for a better world for all.”

Without a doubt, Archbishop Desmond Tutu towered above many world leaders despite his height of only 5 feet 5 inches. The reason is simply because of his unwavering support for the struggle of the oppressed all over the world despite personal costs and risks.

But his main contribution was his fight against apartheid in his home country of South Africa. Talking and traveling tirelessly throughout the 1980s, he became the face of the anti-apartheid movement abroad when many of the leaders of the ANC were behind bars. For his efforts, he was awarded the Nobel Peace Prize. But the event that probably pleased him most was the ending of the South African apartheid regime in 1994.

But even after that, he fearlessly continued to fight against injustice including against the black political elites within the African National Congress which rule South Africa after the fall of the apartheid regime. No wonder many South Africans, both black and white, consider him the nation’s conscience and call him `the moral compass of the nation’.

However, it is very interesting to note that many global media companies including the BBC, when reporting on his death choose to deliberately ignore one important aspect of his struggle which was the fight against the unjust and cruel apartheid regime of Israel.

They sing praises for the archbishop but completely ignore his vocal criticisms of the apartheid policies in occupied Palestine including his call for a global boycott of Israel. This was expressed in an article published by Haaretz in 2014 in which the archbishop wrote:

“Earlier in the week, I called for the suspension of Israel from the International Union of Architects, which was meeting in South Africa.

“I appealed to Israeli sisters and brothers present at the conference to actively disassociate themselves and their profession from the design and construction of infrastructure related to perpetuating injustice, including the separation barrier, the security terminals and checkpoints, and the settlements built on occupied Palestinian land.”

This attitude of selective reporting by the global, especially Western, media highlights their hypocrisy which is ongoing till today. But this is not really surprising because most of the Western media also chose not to highlight the criticisms of Israel by a much more famous South African leader, the late Nelson Mandela who, during a speech in 1997 on the International Day of Solidarity with the Palestinian People said: “We know too well that our freedom is incomplete without the freedom of the Palestinians.”

In another speech Mandela even gave these words of advice to Palestinians in their quest for freedom and self-determination:

“Choose peace rather than confrontation. Except in cases where we cannot get, where we cannot proceed, or we cannot move forward. Then if the only alternative is violence, we will use violence.”

In other words, the stance of Nelson Mandela, the freedom fighter admired by all including the Western media is perfectly in line with the stance of Hamas. Yet the latter has been called a terrorist organisation. The British government even passed a law that bans any public expression of support for Hamas.

But this is also not surprising since Nelson Mandela was also called a terrorist by the western media during his struggle against the apartheid regime of South Africa. He only became admired as a freedom fighter when the regime was finally defeated.

The important lesson that Palestinians need to learn from the experiences of Archbishop Tutu and President Mandela is they have to accept the fact that the hypocritical attitude of governments and selective reporting by the media is part of life and should not deter them from continuing their noble struggle for freedom and justice.

We Were Not Sleeping In The Car: Girl Recalls Chronology Of Carbon Monoxide Poisoning Which Killed Her Friends