It was alleged that the police van was at fault for overtaking at a double line. 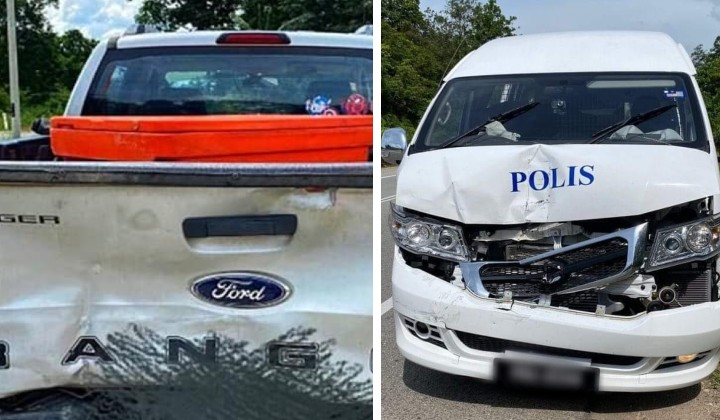 If the police hit your car, are you automatically wrong?

The police fined a man after a police van hit his Ford Ranger four-wheel drive vehicle at KM 16, Jalan Jerantut-Temerloh in Pahang.

The details of the incident were shared via Twitter @itslyzaa on Thursday and went viral with 17,500 likes and 16,500 retweets.

The post also revealed the condition of both vehicles with damage to the rear (Ford Ranger) and front (police van), along with the summons received by the man.

However, it was claimed that the police van hit the man’s vehicle, and the incident was recorded through a dashcam video.

Disappointingly, the man could only claim his insurance because he could not claim from the police insurance.

In the summons, the man was asked to appear in person or through a lawyer at the Temerloh Magistrate’s Court in October.

The summons was issued for parking a vehicle dangerously and obstructing.

However, it was claimed that the man did not park on the side of the road or block it, but instead wanted to enter the intersection and signalled.

Meanwhile, Temerloh District Police Chief, Assistant Commissioner Mohd Azhar Mohd Yusoff confirmed the incident in a statement and said that further investigation would be carried out.

The Operations Room of the Temerloh District Police Office (IPD), which received information about the incident, identified an accident involving a Royal Malaysian Police (PDRM) van from the Lipis IPD and a civilian vehicle.

The driver and passengers in both vehicles did not suffer any injuries.

The investigation is being conducted under Section 43(1) of the Road Transport Act (APJ) 1987, which is reckless and dangerous driving.

The investigation results have been submitted to the Temerloh Deputy Public Prosecutor’s Office.

The public vehicle driver is to be charged for obstructing traffic under Rule 12(4) LN 166/59, which means vehicles cannot stop and cut across double white lines.

The Temerloh District Traffic Investigation and Enforcement Division has issued a summons to the driver of the public vehicle, while the driver of the police van has also been sued for failing to control the vehicle and causing an accident.

Meanwhile, he hoped that with the explanation, there would be no more speculation about the actions of the PDRM in carrying out their duties.

The police thanked the members of the public who were concerned and provided information to assist the police in carrying out the investigation.

Mohd Azhar also advised the public members always to be careful and obey the rules of the road.