Two suspects have been arrested by the police, with three others on the loose. 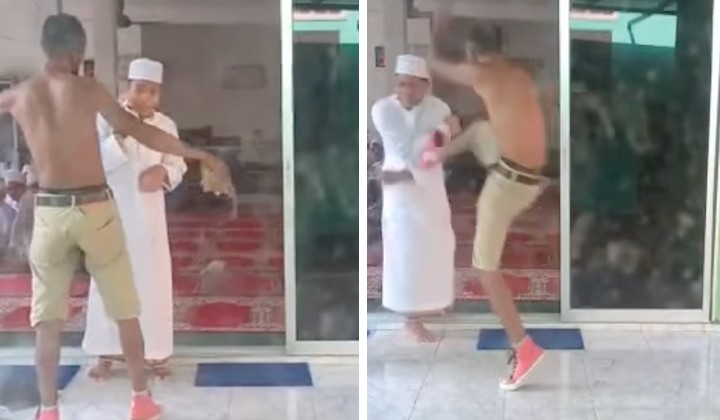 Two of the five men suspected of ‘attacking’ a tahfiz centre – beating the teacher and students – were successfully arrested by the police.

Three more suspects are still being traced including a main suspect, whose personal details have been identified and efforts to arrest the suspect are being intensified.

He said the two arrested suspects tested positive for methamphetamine and were also investigated under Section 15 (1) (a) of the Dangerous Drugs Act 1952.

It is believed that the suspect was not satisfied with the tahfiz centre over food charges.

Based on preliminary information, five men and a student went to the tahfiz centre in a four-wheel drive before three suspects attacked the victim.

In that incident, the tahfiz caretaker was injured in his right eye and received four stitches, an injury to his hand and bruises on his body.

Meanwhile, the student also sustained injuries to his body.

In one video lasting 2.51 minutes, a man wearing shorts scolded a victim before hitting him.

The tahfiz centre has been temporarily closed following the attack.

Based on the recording, the man wearing the shoes expressed his displeasure when his nephew and other students were beaten.

The man then hit the victim before challenging him to fight.

The incident happened in front of other tahfiz students who were visibly shaken and unable to help.

The assault drew an angry response from netizens who called for justice.