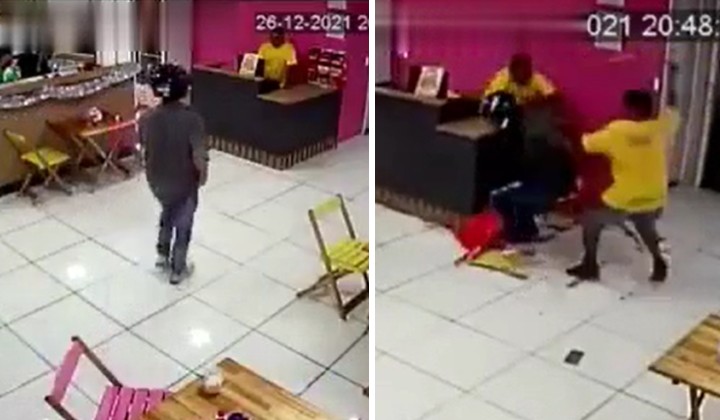 Robberies are often risky business as the consequences that come with them might hurt or land someone in jail.

One man found that out the hard way as he was beaten up by the workers of a local restaurant after he tried to rob the place.

In a video posted by Facebook user Kim Leong Him that went viral recently, a man was seen entering the premises before heading straight to the counter to try and get some money.

However, the man didn’t realise that one of the staff members who was sitting nearby had noticed that there was something fishy going on and immediately went behind him.

Once the staff noticed that the man had bad intentions, he then proceeded to take one of the nearby chairs and smack the robber from behind, WWE-style.

A tussle then ensued between the robber, the cashier, and the staff who hit the man before two more people came into the scene and jumped in on the action.

Luckily during the altercation, the children who were nearby were brought out of the restaurant by a female worker.

Netizens rooted for the workers

Commenters who saw the video were bemused by the scuffle but most applauded the staff for acting swiftly to prevent the robbery.

One commenter said that the worker who hit the robber with the chair reminded him of the popular 90’s Asian gangster flick, Young and Dangerous.

Another commenter even jokingly said that the chair, not the workers, was the true hero of the day.

However, there were those who were concerned with the safety of the nearby children but were relieved that they were brought out before the brawl got worse.

What we can learn from the video is that crime doesn’t pay and if it does, it costs an arm and a leg.