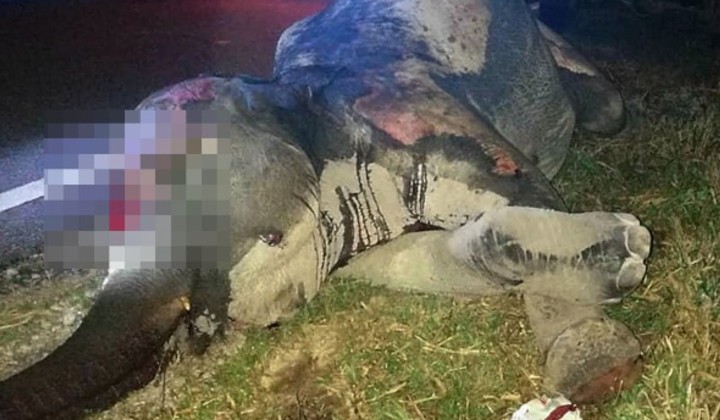 The medium-sized elephant died on the spot when it suffered severe head injuries.

The damage was inflicted when the elephant calfâ€™s head caught under the rear tyre of the heavy-loaded lorry.

Another lorry was needed for the extrication of the elephantâ€™s remains with the help of the Department of Wildlife and National Parks (PERHILITAN).

He claims that the incident happened suddenly at around 10.23pm.

By the time he noticed a herd of elephants crossing the road, he was not able to stop his lorry.

Iâ€™m still shocked by the incident. I didnâ€™t know it was a wild elephant, I thought it was farm animals like cows or sheep.

This is not the first time wild animals are being accidentally run over.

There are only around 1,500 elephants left in the forests of Malaysia says WWF last year.

PERHILITAN has released an informational video not too long ago to educate the public;

1. Slow down or stop your vehicle. Give the animal some space.
2. Keep calm!
3. Lower your lights. Do NOT flash light them.
4. Do NOT honk your car! Animals when startled can become violent.
5. It is safer to be IN your vehicle than going out.

In an article by MNN, it is said that elephants can actually mourn for the loss of their loved ones.

We hope the elephantâ€™s remains were disposed of righteously, as elephants are deemed to be extremely sensitive creatures.

Elephants are also known to weep and laugh. So if you do pass Hulu Terengganu, and hear weeps of elephants; it could possibly be the deceased elephantâ€™s mother mourning the loss of her calf.

[Watch] ‘Makcik’, Kids & Other Flood Victims Were Forced To Camp On The Highway In Pahang