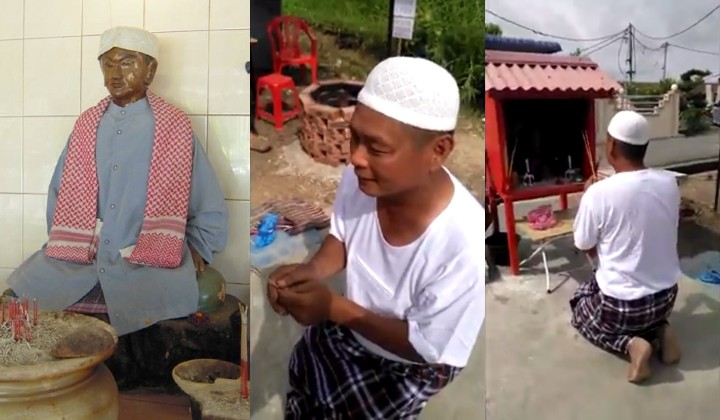 Last week, a video of a Chinese man worshiping at an altar circulating on social media caused quite a ruckus.

Well, he was dressed in a traditional Malay outfit, complete with sarong and kopiah. And the Malay Muslim community were NOT okay with it.

Realising his error, 43- year old Lim Lip Kok has apologised for the incident that took place at Taman Piandang Indah in Perak.

Lim Lip Kok via The Star

The Star reports that his apology was graciously accepted by the Tanjung Piandang Mosqueâ€™s Religious Bureau to avoid a rift.

Mohd Yusop Budin, chairman of the bureau also said â€œLimâ€™s action tarnished the dignity of Muslims. We want to safeguard the dignity of all religions and the good of all quarters.â€

The 43-year old fisherman was performing a ritual at a Datuk
Gong Temple.

The Datuk Gong deity is actually based on the Datuk Keramat cult, which was popular among Malays in the 19th century.

When the Chinese migrated to Malaya, they merged aspects of their religious practices together with local elements in an attempt to adapt to the foreign land.

The Datuk Gong deity is a mystical Malay saint that Chinese
Malaysians pray to for protection, wealth, health and multiple other needs. In
some altars, the figurine resembles a Malay man, wearing a songkok, kopiah or
tengkolok.

So, sometimes worshippers dress in clothing that would be most appeasing to the deity.

While the matter is settled now, this incident should serve as an opportunity to understand the local culture and history while remaining tolerant of one another.