From using stones, sticks and slippers to using just our arms and legs, these Malaysian childhood games will surely bring you nostalgia. 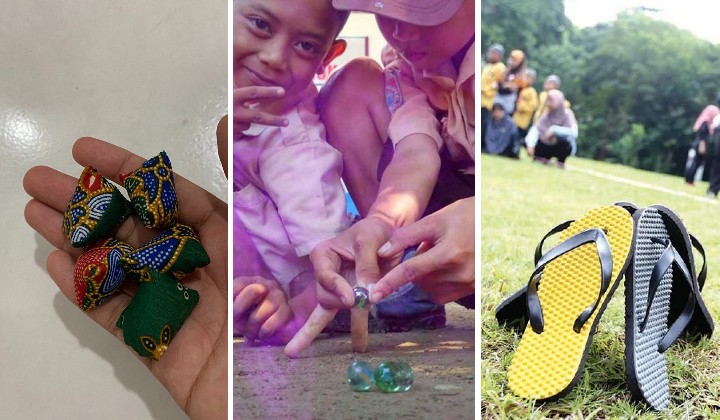 Technology makes it quite impossible for Gen Z nowadays to play or even know these types of traditional games. But that doesn’t mean that they should be forgotten by time.

We should bring them back!

Here’s a throwback of your parents’ (or grandparents’) favourite games that they used to play when they were kids. You might know them too if you’re old enough. 😌

Teng-Teng / Ketinting / Jengkek Kapal Terbang is a game similar to Hopscotch. You would have to draw the boxes (shaped like an aeroplane with 9 boxes) on a flat surface and have a gundu or marker (like a stone) to throw in the boxes.

Throw the gundu in the first box and hop on one foot (you have to skip the box where your gundu is on) till you return back.

Then continue to throw the gundu onto the next box and continue hopping till you fail to throw the gundu accordingly, you stepped on the line or basically just fall down due to poor body coordination (you gotta know how to balance yourself to master this awesome game).

Batu Seremban/Serembat or Selambut is a game of throwing stones and catching them. There are many variations to this game like having seven stones instead of five and using pebbles instead of bags of batik cloths filled with sand/saga seeds/whatever seed you have.

You basically throw one stone in the air, catch the remaining stones on the floor (from one to six, depending on the level) and then proceed to catch the falling stone.

And then there’s a balancing part where you throw all the stones in the air (strategically, of course), catch and balance them on the back of your palm and then throw it again to catch them in your palms. (We told you, it’s a game of throwing and catching stones).

Girls in groups of 2 or 5 usually play these and you can tell someone is a good Batu Seremban player if her palms are bent like a traditional dancer’s hands. You’re cool if you have those hands. 😎

This one explains itself. You throw your slippers at others! It’s an extreme sport really, especially if you use those hard and thick slippers (clog or terompah is strictly prohibited, you could get hospitalised).

Tuju Kasut / Baling Selipar starts with two teams, one aiming for the stack of slippers to collapse and one team throwing the slippers at people. The point of the game is to smack your mortal enemy with a shoe enhance your aiming skills. 👀

When one team manages to make the stack of shoe collapse, the other team can attack them with slippers. The first team has to go and stack up the shoes again while avoiding being hit with the other team’s slippers. We know a friend that almost went blind with this game as she was hit with a slipper right on her face. Brutal game, we tell you.

Capteh, Jianzi or Sepak Bulu Ayam is a game where you balance a feathered shuttlecock on air for as long as possible by kicking it with your feet. The shuttlecock itself is called capteh – it is made of a rubber base disk with rooster’s feathers.

Also popular in most Southeast Asian countries, this game is said to be a practice for children before they can move on to Sepak Takraw or Sepak Raga.

The rule of the game is simple (simple doesn’t mean easy though), you kick the capteh as long as you can with one foot (cannot use hands). You can use your chest or even head if you’re skilled and this game can be played with groups or individually. The one who gets to balance the capteh the most wins.

Kaunda Kaundi (known in the Indian community) / Konda Kondi / Ketuk Pedang is a stick-flicking game. This game requires precise stick flicking skills and should be played in two teams. Who needs a bat when you have a stick? 😌

Team A will use the mother stick to flick the child stick to Team B. If Team B catches it, they win. If they don’t, they have to aim and throw back the stick as near as possible to the initial hole. Marks can be calculated by the distance of the child stick to the hole.

We feel sad for anyone who hasn’t experienced this classic game. You just need friends (the good ol times when we used to have lots of friends huh? 😢) to play this with.

This is a game of chasing or being chased and is also called the fox and the hen game (musang & ibu ayam).

The eagle is the predator while the hen has several chicks – prey – lining up behind her. The idea is for the eagle to catch the chicks while the hen protects them. So round and round they go!

Just now you were flicking sticks? Now you’re flicking marbles with your fingers! You know, there was a time when those who collect the most unique marbles were the coolest. Where did the time go?

There are a lot of ways to play with marbles (guli batu or guli kapur) but this is one of the simplest ways.

You make a circle on flat ground and then another curved hole (main hole) in the middle. Put in some marbles (be sure to remember which marbles are yours). The first round determines who goes first so aim and throw your first marble as near as possible to the main hole.

Then the real game starts when you carefully flick your opponent’s marbles out of the circle. You can throw, flick or do whatever it takes to kick those undeserving marbles out. It’s a bit like snooker, but with your fingers instead of a stick.

This game was so popular back then that now, it is turned into a digital game and also a contemporary song by Elizabeth Tan. It’s a game of cops chasing robbers and throwing them into imaginary jails.

The chasing part is fun and all but the choosing sides part beforehand is legendary. In a group, you have to put your foot together in a circle, point and sing the ‘Polis Sentry’ song. Whoever gets chosen will become the cop and thief consecutively.

But the real question remains. What are the real lyrics?

But it could actually be this too. “Police & Thief, went to jungle. Police caught thief, thief ran away”

Which one is it? Nobody truly knows.

This is a game of several levels and tests your ability to run, jump and crawl. It’s called Lompat Tikus or Lubang Tikus where two people would create obstacles with their hands and other players would have to either jump or crawl to the other side.

It’s the jumping part that’s nerve-wracking! Especially when they use all four hands for the obstacle. Gotta go sharpen your jumping skills!

This is also called Pekong Tin or Tuju Tin. It’s fairly easy but you gotta find empty cans and a thing to throw at them. Usually, kids just use slippers or a ball.

This game tests your aiming skills as well as you would have three shots of toppling the 10 tin cans with the ball. The one who topples the most, wins.

Channel your stress or hatred towards your exes with this game!

Also called tudung tin or tudung botol, this is by far one of the best childhood games too. It requires laser focus strategy and mad finger flicking skills.

You just need five bottle caps (which were abundant back in the days). Use Lat Tali Lat or One Two Jus (Osom) to determine the turns. Then spin the bottle caps on the floor and take out one cap.

The opponent can now pick which caps they want the player to aim and flick. The player can use their hands to find good aiming positions. This game is similar to carrom but with bottle caps.

Pepsi Cola is another fun game to play with your friends. Just step on your friends’ feet! Who doesn’t love that?

For this game, you gather around with your friends in a circle and take 3 steps backwards. Next, sing the Pepsi Cola song to determine the first player.

Then start stomping! The attacker has to stay in their spot and attack the next person by trying to stomp their foot. The defender has to avoid the stomp by jumping and opening their legs widely apart. (White shoes? What are those?)

The song to the game has a lot of variations.

Some went like, “Pepsi Cola, Icy Cola, Who will be the number one”.

Hey as long as it rhymes with Pepsi Cola, we’re good to go!

If you ask kids now, do you think they would know these games above?

“What are those? What? You don’t play Candy Crush or PUBG when you were kids?” Shocking.

Well, maybe it’s time for a family day with your kids. You could put away the gadgets for a little while and teach them some of these legendary games.

Who knows, you might still enjoy these games with them too.

If your favourite childhood game is not in here, take a look at this article for Part Two.

READ MORE: How Many Of These Traditional Childhood Games Did You Play? [Part 2]

How Many Of These Traditional Childhood Games Did You Play? [Part 2]