From extreme physical sports to mild singing games, these traditional childhood games are sure to walk you down memory lane. 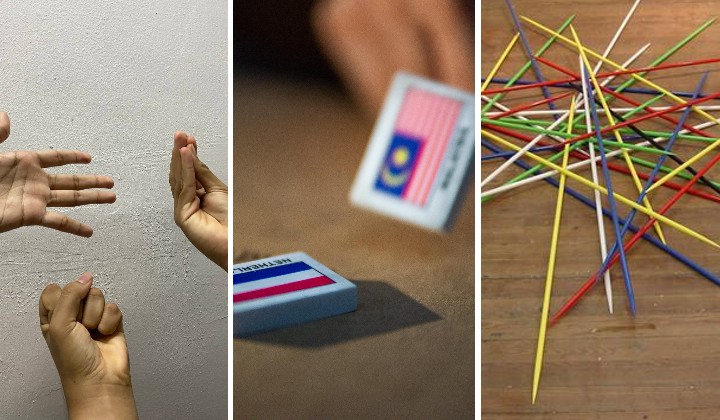 Time passes by so quickly, doesn’t it?

One thing you’re playing outside with your friends and next thing you know, you’re an adult who depends on tech-savvy screens to amuse yourself.

But do you still remember the times when we were easily amused by the things we find around us? Or basically just with our friends?

Here are some examples of our traditional childhood games that we used to play with our friends:

This is a game of chasing and tagging between Datuk Harimau (Mr Tiger). But it has a song that’s a bit special before the chasing starts. It’s basically a song to ask the tiger (chaser) when is he hungry and when is he going to eat you (chase and tag).

The tiger can answer whatever time he pleases but to start chasing, he either needs to say “12 o’clock” (every tiger has a synchronized lunchtime like us working people) or “it’s time to eat!”.

So the kids need to sing the song a couple of times before the tiger answers the awaited answer. It adds an element of surprise to know when you should start running and panicking as prey.

If you don’t know the Yoyo toy, we just feel sorry for you.

It’s a huge sense of accomplishment when you manage to roll the yoyo back to your palms or accidentally to your face, giving you a black eye. Ahh, the good ol’ days.

But other than yoyo, a traditional game one can play is the Diabolo. Diabolo is a Chinese version of a yoyo but you balance the hourglass-shaped yoyo on a string with two sticks.

You’ll often see this instrument being played as a performance during cultural festivals in Malaysia. It’s like seeing a master juggler doing their tossing and shuffling tricks. It’s just magical.

Kabaddi is a traditional Indian game that is played by two teams on a court. Each attacker (called raider) takes a turn crossing onto the other team’s side (while repeating the word kabaddi) and tagging as many opponents as possible without being caught (or taking a breath from saying kabaddi) before returning to their territory.

The opponents have to avoid being tagged and if one of them is tagged, they have to catch the raider before he can run to the other side. It’s the catching part that gets a little bit physical. They can grab the raider’s foot, or legs, tackle him in front or just chase him out of the court. It doesn’t sound that extreme? Think again.

Gasing or spinning top is a traditional Malaysian game that’s suitable for both kids and adults. With different sizes and shapes of tops played all over Malaysia, there are a variety of ways to play them too.

A popular variety is called Gasing Pangkah. Gasing Pangkah features two or more players competing to strike each other’s top out of a circle or to make it fall over and stop spinning. It’s often played by the older generation men in Terengganu after harvesting season.

Congkak is a game for the mind. It literally is, because the word ‘Congkak’ is said to originate from the word ‘congak‘ which means counting in your head or mental arithmetic.

It is a two-player game where each player drops the marble or rubber seeds into a plank carved with 14 small holes and two big holes at the ends. Before there was a wooden plank, kids used to dig up holes in the ground and play this game. No big deal.

Originally played by girls, this game can now be played by anyone. The one that has the most marbles on their end, wins.

Lompat Getah or Zero Point is a popular children’s game back in the 70s through the 90s. The rope is made by tying rubber bands together to the desired length.

There are several versions to play Zero Point. One is by holding the rubber rope in a single line at various levels from the ground to the head. The player has to jump over the rope, no matter how high it is. How to jump over the rope when it’s at the top level? Well, that’s when your foot skills come in.

Another version is to hold the rubber loop in a rectangle shape so there’s two lines. The player has to jump in s series of patterns a number of times and proceed to the next level with a more complicated pattern or at a higher height.

Galah Panjang is an exciting game of tagging too. It means ‘long wooden pole’ but rest assured, there are no poles involved. It’s probably just an expression of saying the arms of the defenders need to be long (like a wooden pole) to block attackers.

Just like Kabaddi (without the intense tackling), the players move inside a court with two teams, the defending team and the attacking team.

The attacker just needs to get to the other side of the court without being tagged at every station or line. The defending team can only move horizontally to block the attacker from passing through the line.

This game is popular among kids in areas with lots of palm trees like betelnut trees (pokok pinang). Upih here means the sheath of a palm frond – they’re big and boat-like. Old and dried betelnut fronds will fall to the ground and well, kids get creative!

This is just a simple game of speed with one person sitting on the sheath and one person pulling the leaves in a race. Whichever team gets to the finish line first, wins.

Tapak Gajah (Elephant’s Feet) or Kaki Hantu (Ghost’s Feet) are racing games that use a certain tool for the players to step on.

For Tapak Gajah, players will creatively use coconut shells – that are cut in half and punched a hole in the middle – as shoes. They’ll then insert a rope in each of the holes and tie a dead knot. Then, while holding the rope tightly, they’ll walk to the finish line.

Meanwhile, Kaki Hantu (Ghost’s Feet) / Kaki Buloh (Bamboo Poles) is also a race, but it requires the players to stand on walking stilts. It may look easy but balancing the stilts is quite a hard thing to do. Now we know why ghosts prefer to crawl huh?

Another kids’ game, this is a game similar to the western’s London Bridge Is Falling Down. Hey, we have our own versions too, okay?

It’s a game of trapping a player from the train of players that goes under the ‘hand trap’ when the song finishes. The train of players would have to circle the trappers and go underneath their held-up hands. Whoever gets caught, well… they lose.

So this one is our Malaysian version of ‘Ring Around The Rosie’. Sort of. It has an iconic nursery rhyme that you can 100% turn into a horror movie background if you just slow down the tempo and add some creepy laughs. 100%.

The kids basically hold each other hands in a circle with a blindfolded ‘grandma’ in the middle. They sing the song, go around the grandma and stop when the song finishes. Then the grandma would have to catch one of the kids and guess the name of the kid she caught. If she’s right then it’s that kid’s turn to play the grandma.

This is not a very popular game but once you know this game, you’ll never forget the fun. It’s a game of ‘Follow The Leader’.

Fairly easy (if it’s at a slow pace), you sit around in a circle and the leader will sing “Cap cap kali cap cap cap” while clapping twice and doing whatever act he wants next. The next person (B) has to follow the steps and the next, C will follow B’s steps. It’s just a game of singing and copying whatever the person beside you does.

The tricky part is when the song goes faster and the pace of the acts goes quickly until you mess up the steps. It’s a great game to play with friends on a camping trip or during an ice-breaking session.

This is a legendary game. If anyone doesn’t remember this, you need help.

This game requires a packet of colourful sticks and a huge amount of laser-sharp focus. Firstly, you have to release a bundle of sticks on a flat surface. Then, proceed to pick a stick one by one without disturbing the position of others. THE STRUGGLE!

For the marks, the colour determines the points. So whichever sticks you manage to obtain, those will add up to your points. Those with the highest points win and the lowest points, well… you get it.

The real original game doesn’t really have all the neon plastic colours. Back in the day, people make wooden sticks from coconut leaves.

Anyone who uses a pencil and an eraser would’ve played this game when they were younger. Especially those perfect rectangular flat erasers with logos or flags printed on them.

Remember the days when you used to line up at the Korperasi (stationery) store just to buy those unique erasers?

The most ideal time to play this is when the teacher is late to class or class is cancelled. The tournament BEGINS.

This game is super easy. In a battle, two players will choose their best erasers and fight to the death. Just flip the erasers until one of them lands on the opponent’s eraser. The winner gets to keep the loser’s eraser. VICTORY!

Hey, those who have a collection of erasers are considered to be at the top of the social food chain. 😎

The ultimate decision-making game is, of course, the legendary ‘Lat Tali Lat Tali Tam Pom’ or One Two Jus game.

Who starts first? Lat Tali Lat. Who should pay for dinner? One Two Jus.

Decision-making has never been easier for Malaysians.

The Lat Tali Lat game is used to determine the turn of someone in a group.

If your favourite childhood game isn’t on this list, try checking our Part 1 article.

READ MORE: How Many Of These Traditional Childhood Games Did You Play?

During this Malaysia Day, why not get your kids or your friends to play these legendary games again? Adults can also play most of these games, so give it a try.

If you wanna try some of these traditional games and you’re in KL from the 23 to 25 of September, go to Dataran Merdeka and witness the Malaysia Games Festival. It’s a festival to showcase Malaysia’s traditional culture through our enticing games.

You can just see the matches or participate in the games yourself. Read more about the festival here.

READ MORE: Get Ready To Game At The Malaysia Games Festival This September!