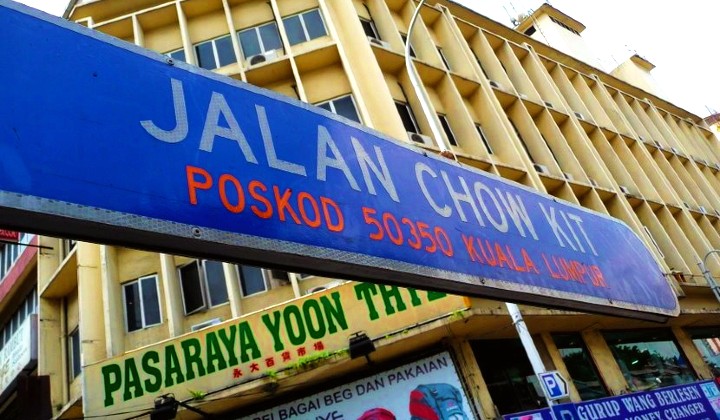 Malaysians are familiar with Chow Kit, widely known as the unofficial red-light district of Kuala Lumpur, infamous for itâ€™s wandering drug addicts, illegal prostitution joints and gangsters that come out after dark.

But the truth is, there is much more to Chow Kit than its dark side. Surviving much of the rapid development of KL City, it is full of history and culture. In the past several years, there have been new additions to the area (read: gentrification) which also attracted a new wave of tourists and locals.

These additions have spurred The New York Times to name the area in its travel list of 52 Places to Go in 2020, stating that the â€œunderappreciated neighbourhoodâ€ has received a â€œdose of fresh style and energyâ€.

We spoke to the writer of the piece, Singapore based freelance writer Sanjay Surana, who highlighted 5 key attractions in the area, to find out why he liked these places in particular.

Designed by the Brooklyn-based Studio Tack, the 113-roomed boutique hotel in Chow Kit, creatively named The Chow Kit is the studioâ€™s first project in Asia.

The hotel is surprisingly luxurious, with ceiling to floor windows, timber floors, luxury linens and organic toiletries. Far from tacky, the rooms are designed with a modern take on local themes that evoke a feeling of Asian grandeur.

A stylish, well-thought out place that serves as a fine base from which to explore the neighbourhood. I like the aged feel of the Chow Kit Kitchen & Bar.

MoMoâ€™s also has a communal space called The Playground, where travellers and locals are invited to socialise at DJâ€™ed parties, talks, shows and even karaoke nights.

Fun, quirky, doesn’t take itself too seriously, this is a smart place for those on a tighter budget.

Divided into two sections: wet and dry. The market is located just 2.5 kilometres from the Petronas Twin Towers.

The wet market features fresh meats butchered in the open and fresh fish, some still alive swimming madly in pails, which can make the smell and sights of the market a bit overwhelming.

But past these stalls is an endless variety of tropical fruits sold at rock bottom prices with vendors offering you to taste before you decide how much you want.

The dry market tends to be the more tourist-friendly section selling clothes, shoes, DVDs and textiles among others.

A never-ending riot of sights and smells, a place that seemingly hasn’t changed in decades, there’s always something to see here.

Standing majestically in Kampung Baru at the border of Chow Kit market, is the largest temple in Southeast Asia, the Gurdwara Tatt Khalsa Diwan.

The temple is a queer sight to behold in the prominently Malay area. Though, it’s Mughal architecture sometimes confuses people who enter every now and then mistaking it for a mosque.

The templeâ€™s history can be traced all the way back to 1819 while the current building has been around since the 1920s. Housing at least 4 darbars, the 1.5 acre gurdwara is the main Sikh temple in Malaysia and is often jam-packed with people on days of celebration and prayer.

Tourists and curious people are always welcomed to visit the temple which serves food on a daily basis.

A large complex with shapely lines and gleaming domes, this temple stands out for its ornate architecture so close to the market.

The new restaurants in Chow Kit are here to satisfy any meal, be it breakfast, brunch, lunch, or dinner. These eateries are here to serve beautiful meals AND sights.

NYT namedrops the Caribbean-influenced Joloko. A bright coloured restaurant featuring printed tiles and florally murals, the restaurant and bar boasts of having at least 47 different varieties of mezcal.

If youâ€™re looking for brunch and coffee, take a seat under pretty tapestries floating in the sunshine at Tapestry. Intertwining classic brunch dishes with Malaysian heritage, the restaurant uses locally sourced produce for their modern dishes.

French-inspired Brasserie 25 is Hotel Stripes KLâ€™s super chic restaurant. With their lofty high ceilings, brass chandeliers, brick walls and tan leather chairs, youâ€™d be surprised that this place is located in â€œseedyâ€ Chow Kit at all.

Man Tao Bar is the perfect spot for dinner and drinks. Also located at Hotel Stripes, their rooftop bar is a relaxing space with unobstructed views of downtown KL.

For a healthy seafood lunch, check out Gavel. This British-owned restaurant is far from the bland stereotype often associated with the country. It is owned by the same chef that built Changkat Bukit Bintangâ€™s Magnificent Fish & Chips and Bangsarâ€™s Southern Rock Seafood Kitchen.

The Row was formally the Asian Heritage Row, a popular nightclub strip of 22 shophouses built in the 1940s. Now, it features restaurants, cafes, art galleries and a smattering of creative businesses.

Limapulo Baba Can Cook is probably The Rowâ€™s most popular lunch spot, drawing crowds with their authentic Nyonya specialities. Despite being a favourite for lunch, the restaurant opens for dinner as well.

Singapore company The Timbre Group rocks up The Row with their kitchen and bar, Timbre. Featuring live performances by local bands most nights, people come for the shows and end up staying for the good food and delectable drinks.

Calm and cosy, League of Captains is a two-floor cafe founded by the folks behind local clothing label Pestle & Mortar. Besides being a perfect coffee spot, the cafe also features a retail section spotlighting local clothing brands like their own, as well as Publish, Raised by Wolves, and Hypergrand.

Designed by Singaporean firm FARM, The Co. is both an event and sophisticated coworking space where entrepreneurs can eat, drink, work, and relax together.

Slate at The Row is a multipurpose event space that has been furnished in such a minimalist way that it provides the ultimate blank canvas for all your event needs.

The Row is a beautifully realised reincarnation of heritage buildings into something that appeals to the public today.

Besides Chow Kit, Sabah also made it into NYTâ€™s list at number 28, highlighting that increased tourism to the state could provide an incentive to protect the primaeval jungles located there.

Malaysia was one of only two Southeast Asian countries mentioned on the list, the other country being Cambodia.