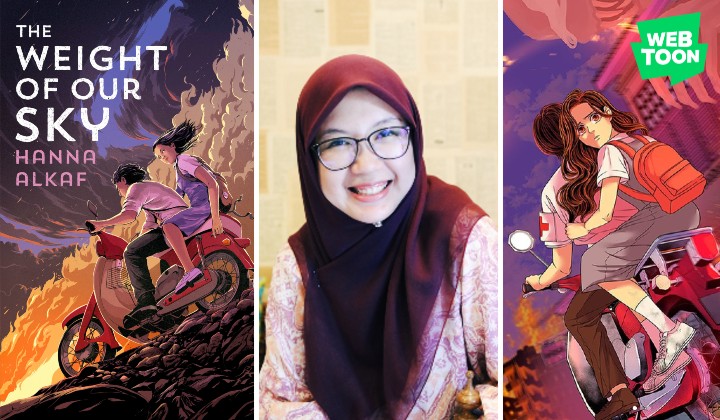 Hanna Alkaf is the author of The Weight of Our Sky, which made waves when it was released earlier this year. The novel is set in 1969 during the May 13th racial riots and features a young Malay protagonist with OCD that she visualizes as a djinn.

The debut novel from Hanna throws you into the chaos and unrest that is part of our national history, despite how much we may want to erase it from our sejarah textbooks.

You may have seen her book in our local bookstores, but if books aren’t your thing, the novel is now being adapted in web comic form on the Webtoons app!

Webtoon is a free mobile app that lets you read webcomics for free. They house many popular webcomics and is a platform for aspiring artists to post their comics as well.

They are now adapting YA novels into webcomics to expand the content offered on the app.

Not many authors choose to have their work adopted into a webcomic. When we spoke to Hanna Alkaf, we learned that Webtoons approached her first, as they thought the story would work really well in a webcomic format!

Hanna isn’t directly responsible for the actual adaptation of book into a webcomic. Producer Susan Cheng and writer Alya Rehman are in charge of that, though Hanna gets to review the episodes beforehand and give comments.

One thing that Hanna insisted on is an all-Malaysian art team.

It was really important to her that Malaysian artists were brought on board to accurately portray all the little details about Malaysia’s unique culture and setting.

She also wanted to keep the difficult topics such as OCD and race riots portrayed in a sensitive manner, and make sure that the seriousness of the issue came across in the art.

Which is why the art is now helmed by Malaysian artist Nisrina AN, with lots of help from colourists Nurel and Toadfrogs, both Malaysians as well.

Hanna insists on capturing an authentic feel of KL in the 1960s, so she is quite active in the visualisation process. Everything from the settings to the background, and geographic landmarks have to be accurate.

It’s absolutely amazing to read a webcomic and see the striking blue of the girls’ pinafore, or the unmistakable colonial architecture of Petaling Street, and the diverse mix of characters of all races.

Malaysia may not show up often in mainstream media the way we ourselves see it: complete with uncles and aunties, the high school uniforms, even the kapcais.

It’s about time Malaysians starting telling our own Malaysian stories.

If you can’t wait to finish the story, pick up The Weight of Our Sky in a bookshop near you. The Webtoon has only 4 episodes as of the time of writing and will be updated on a weekly basis.

Look out for Hanna’s new book The Girl & The Ghost coming out in 2020!