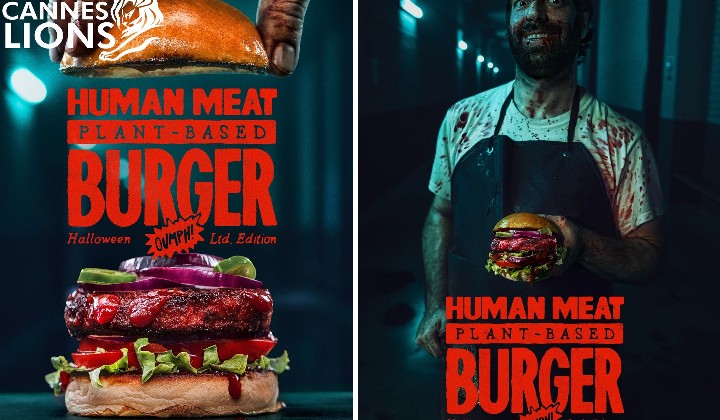 We know, your first thought would be “What in the world?!?”

Yeap, that’s exactly the reaction that they want.

A Swedish food brand called Oumph! has set the bar high on innovative food by creating a plant-based burger in the flavour of ‘human flesh’. And they even won an award for it too at the Cannes Lion Festival.

Again, WHAT IN THE WORLD?!?

Relax, it’s plant-based and no human is harmed

Don’t be fooled by the words. Like any other brand, this is just a marketing technique. A smart one.

Take a look at their funnily creepy ad for the plant-based human meat burger here. Disclaimer: It’ll make you squirm.

The patty is not actually made with human flesh or is added any human bits to it. It’s actually 100% made from plants.

The ingredients made for this patty are just soy, mushrooms, wheat protein, plant-based fats as well as a mysterious spice mix (no, no humans essence there).

It is said to taste like human meat but they didn’t really go and have a taste of real human flesh for R&D. Even they think that’s too crazy. They just experimented and assumed how close they could come to the real ‘meat’, in terms of taste and texture.

The actual aim behind this is to convince meat-lovers that plant-based products could “replicate the taste of any meat” and be creative while they’re at it too. They wanna change how people eat and as a small company, they need to be bold in pushing some boundaries.

The solution? A tasty plant-based human meat burger. What could go wrong?

Additionally, they even had to emphasise that no humans were injured in the development of this product (phew!).

Launched on Halloween last year, they’ve set up a food truck in Stockholm, Sweden serving the “scariest plant-based food ever”. Curious and fearless locals got a chance to try the world’s first plant-based burger resembling human meat. However, the burger is only available during Halloween because otherwise, it’d be creepy.

Being one of the most spirited brands to advocate for sustainability, Oumph! has received a number of accolades prizing their efforts.

Recently, for the Plant-Based Human Meat Burger, they won a Silver Lion Award in the category of Brand Experience & Activation at the Cannes Lion Festival at the end of June 2022.

They were one of 1,919 entries that were received in this category this year by the Cannes Lions Awards, the global benchmark for creative excellence.

Cannes Lion Festival is similar to the Cannes Film Festival, but they focus on the creative marketing industry instead.

“Developing a plant-based burger that tastes of human meat was exciting, and a little bit scary, and then for this campaign to win in Cannes is incredibly exciting! We developed this burger in no time as soon as we knew what taste and texture we were after. This is our ultimate and weird way of showing that it’s possible to create any type of food by using just plants.”

Other awards include the best brand for the World Food Innovation Awards 2021, the Gold award for FreeFrom Food Awards 2019 and many more.

In conclusion, it’s just fake human flesh. But still, it doesn’t help to imagine the scenes from Hannibal while eating it.

What if it came to Malaysia? Do you dare to take a bite of this burger? Or do you think it’ll definitely be banned from our country?

Why Does Your Laptop’s Carbon Footprint Matter?