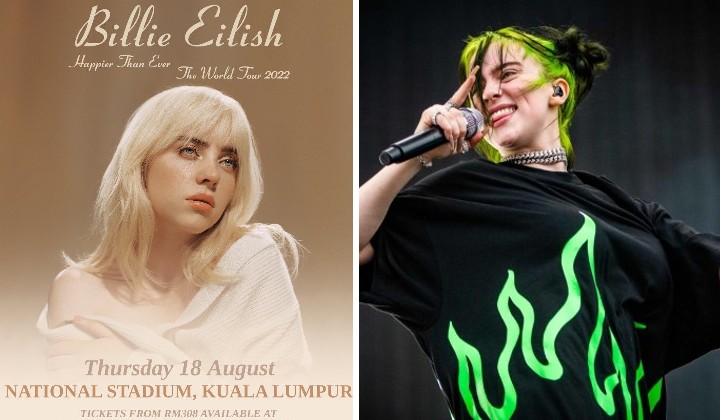 If you’re living under a rock and for some reason do not know Billie Eilish, she’s the one who sings ‘Bad Guy’, ‘Lovely’ along with Khalid, ‘Happier Than Ever’ and also James Bond’s recent ost, ‘No Time To Die’.

She’ll be performing ‘Happier Than Ever’ and other of her hits live in National Stadium, Kuala Lumpur on 18 August 2022, 8.30 pm in conjunction with her world tour.

For your information, she was actually the youngest artist (in 2020) to win Grammy Awards when she was only 18 (were you making history when you were 18?). These included Record Of The Year, Song Of The Year (Bad Guy) and Album Of The Year (When We All Fall Asleep, Where Do We Go?).

Apart from Kuala Lumpur, Malaysia, in her ‘Happier Than Ever, The World Tour 2022’, the 7x Grammy winner will also be doing concerts in other Asian cities like Bangkok, Singapore, Manila, Seoul and Tokyo.

🦋 We are thrilled to announce 7x Grammy winner, Billie Eilish live in Kuala Lumpur, 18th August 2022 for her ‘Happier Than Ever, The World Tour‘ ! 🦋 pic.twitter.com/llbKzW3HqI

Her tickets are available for RM308, RM408, RM508 and RM598 on GoLive’s website as well as the app. They’re accessible today on 24 June for Fan Club members, 25 June for Live Nation members and finally on 27 June for the public.

So, what are you waiting for? There’s No Time To Die waste! Go get those tickets now! They’ll be selling like hotcakes.