A Twitter user Tasnim got into hot water when she posted up pictures of her flying in Emirates first class to reward herself. 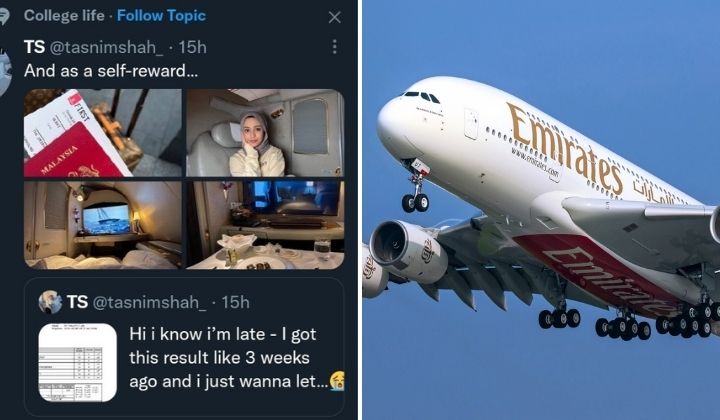 A Malaysian woman named Tasnim (@tasnimshah_), who attends Universiti Teknologi MARA (UiTM) for law, is currently under fire for travelling in first class on an Emirates flight to ‘reward herself.’

She posted several pictures of herself in the first class cubicle on Twitter, but it didn’t get a positive reception.

For many people, Tasnim is from a wealthy family, and she has robbed a university placement from an underprivileged student.

There are a few netizens who tried supporting Tasnim. They pointed out that she has her own business, which sells minimalist embroidered jumpers and pants that cost more than RM300.

However, some netizens surmised that she wouldn’t still be able to afford the flight even if she worked as a model or an influencer. Her expensive lifestyle was allegedly shown in her social media posts.

She have own clothing line. One set (hoodies and pants) is RM329. It is just plain design but with embroidery.

They feel like it’s akin to daylight robbery because the super-rich T20s are exploiting their privileges at the expense of the poor.

Others wondered why she went to a public university when she could have studied abroad since she could afford a luxurious lifestyle.

Why are you in UITM? Isnt that place only for B40? You basically T20

Lepas tu merentan bila non-bumi question why they can’t get into UiTM. Personally, as a Bumi myself, I would not judging the non-bumi for questioning because they have all the rights to question the policy.

Another person jokingly said that the rich continue to be rich due to financial planning. By paying less for her education, she has more money to spend on investments and holidays.

Amidst all the negative comments, a netizen suggested Tasnim sponsor a few poor university students to fix her image.

Hi @tasnimshah_ 🙂 . Why not use the money that you have to sponsor 1 or 2 financially poor university students who deserve it? It can fix your image and publicity. It’s also better than defending yourself. Dismissing issues about poor people is not a hill you want to die on.

Tasnim has made her account private due to the backlash at the time of writing. Perhaps it’s for the best.