The irate woman rather wastes her drink than collect the order on her own. 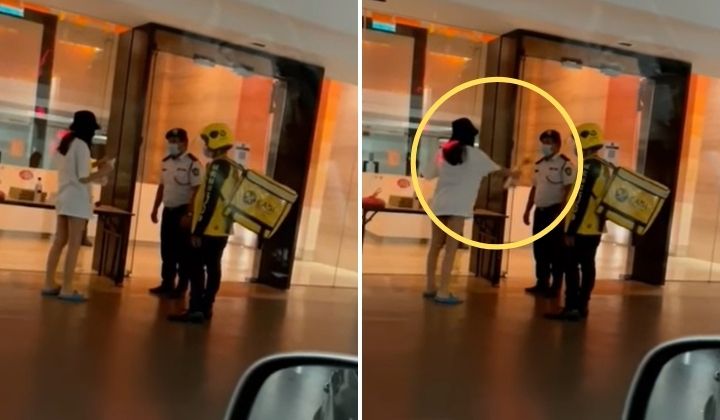 A Facebook user Michael Cheang shared a video yesterday (27 November) showing an irate customer chucking her drink orders at the security guard and the delivery rider.

Cheang, the managing director of the security company M-Forces Security Sdn Bhd, also explained his side of the story on Facebook.

The woman, who’s believed to be from China, ordered bubble tea and insisted the delivery rider send it right to her unit at around 8 pm.

The security guard on duty calmly explained that they’re not permitted to allow delivery riders to go up to the unit due to the current standard operating procedures.

The woman hotly told both of them off when the delivery rider called to explain.

When she finally made her way down, she angrily said, “The other countries including China would do so [deliver to doorstep], why is Malaysia so terrible?”

She proceeded to throw the bubble tea drink at both men before slowly walking off. While she tried not to slip on the floor, the security guard and delivery rider stayed calm and did not retaliate.

Cheang praised his employee, the security guard, for keeping calm and maintaining his professionalism throughout the rude encounter.

While facing such hot-tempered and arrogant residents, they showed professionalism and calmly dealt with the issue. I am proud of them!

He also reminded everyone to be kind to all frontliners.

Netizens were outraged at the woman’s behaviour and praised the two men for staying composed.

A netizen said the woman was lucky that they weren’t there that day, or she would have gotten a slap.

Someone else called her a psycho while another wondered whether it’s that difficult to collect the food order herself.

Another netizen said the woman really shamed and gave the Chinese a bad name.

Since the woman is a foreigner, a few netizens told Cheang to lodge a report with the authorities and to stand up for his employee.