Outspoken Malaysian royalty and Kedah MB in a friendly war of words. 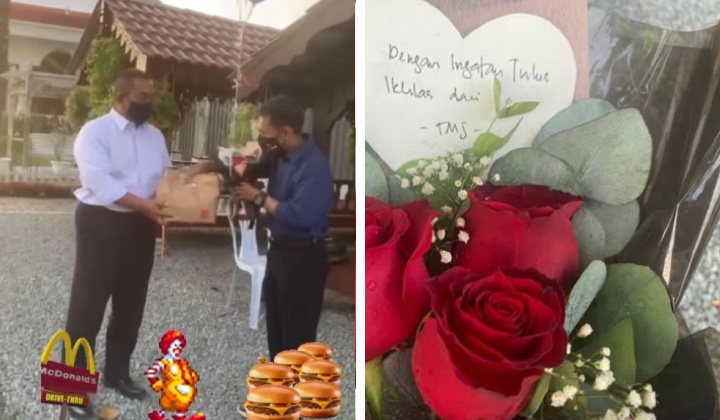 The Kedah Football Association (KFA) President posted pictures of him receiving the gifts on Facebook and he joked about winning or losing as being a custom in football matches.

Sanusi also joked and stated that losing or winning is a custom in matches.

We’ll meet again on Thursday. Lose, draw, or win, it’s all part of the game. To inflame the situation, well that’s obligatory.

Meanwhile, a video of TMJ’s gesture also made its way to social media.

In the video, a representative of His Royal Highness was present to give Sanusi a bouquet of roses and bags of fast food.

Tunku left a caption: “Not on a diet? One of the ways to make clowns happy. “

Kedah will play Johor in the second leg of the Malaysia Cup quarterfinals on 18 November.

The gesture was in response to Muhammad Sanusi mocking the owner of the Johor Darul Ta’zim (JDT) football club on diet issues.

He took a jab at TMJ through social media after JDT was tied to a goalless draw against Kedah FA at the Darul Aman Stadium, Kedah recently.

Indeed, the ‘drama’ between Tunku Ismail and Sanusi had made the local football scene a lot more exciting.

The banters between the two had drawn attention from netizens who regarded it as a form of healthy competition.

Some fans called on Muhammad Sanusi to reply to TMJ’s gesture in kind, perhaps by sending nasi lemak or a custom made Nike boot to His Royal Highness.

Tunku Ismail fired the first shot when he reprimanded the KDA FC management for allegedly being late in paying the salaries of the Red Eagles players.

Muhammad Sanusi had since clarified that KDA FC has no problem in paying the players’ salaries.