Malaysia is credited as one of the most urbanized countries in Asia. 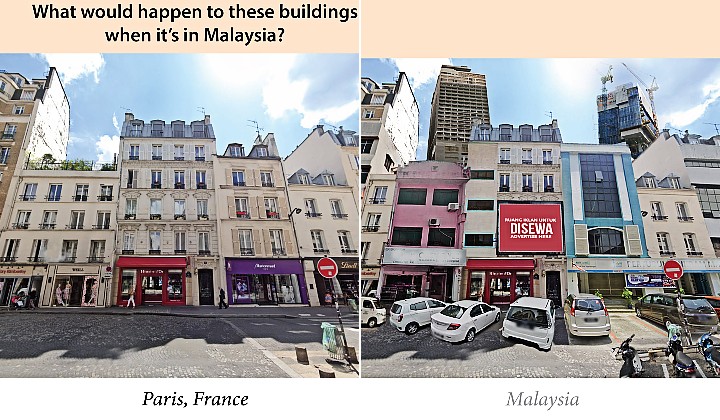 Or at least that’s how most Malaysians on the internet seem to feel when discussing how different our developing nation is in comparison to other countries around the world.

Postings made by a man who calls himself ‘the surreal putrajayan’ on Twitter had hyped up the opinion that Malaysia’s infrastructure, planning and development was heading in the wrong direction.

What went wrong with Malaysia is how we build our cities and towns to accomodate for cars. pic.twitter.com/AqsKpPQXxx

Responding to surreal snapshots of what famous cities and sites from around the world would look like if they were here in Malaysia instead, netizens came to agree that the country’s seemingly unplanned urbanization was;

Intrigued by the juxtaposition presented, TRP had a chance to speak to Chern Yau, A.K.A. Ayao, who is the moderator behind the Hi-design Facebook page and the one responsible for the twilight zone-esque images that had gone viral.

The Hi-design page is notably filled with interesting snippets and commentary on architecture and design where Ayao had made numerous comparisons on how “unique” the urban landscape was here in Malaysia.

Being an amateur designer, Ayao confessed that his edited pictures were rough and less than presentable. However, the artist said that his work reflected what he saw around and wanted Malaysians to see things through his eyes in a funny and light-hearted way.

I just express what I have observed from our neighbourhood by creating and designing social media images. I wish to direct local readers to pay close attention to the destructiveness of the modern building, landscape, architects and planners in our country.

Ayao said that what we see around us are the results of massive industrialisation and urbanisation which had led to the degradation of our environment, loss of ecosystems, biodiversity and the overall beauty of our land.

And of course, the ‘what if’ collection.

According to the World Bank, Malaysia’s urban population had grown from 10 million people to over 15 million between 2000 and 2010 – making us one of the most urbanized countries in the East Asian region behind Japan, South Korea, and Singapore.

Read More: It’s Not Your Imagination. Malaysia’s Cities Have Been Getting Hotter Since The 80s

A 2020 report by the Global Forest Watch organisation also revealed that Malaysia has lost over 17% of our remaining forests in just as little as 10 years, and what little is left was still being taken away.

A report by Mangabay claimed that the country had the world’s highest deforestation rate between 2000 and 2012 where we had lost more than 47,278 square kilometres of our natural greenery.