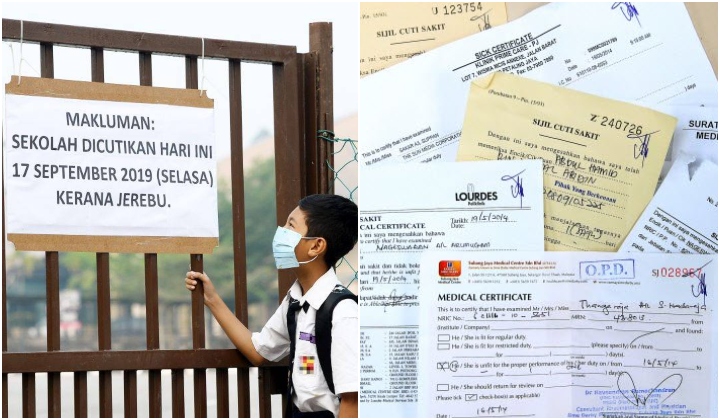 As the haze hit â€œvery unhealthyâ€ levels in several locations, all schools in Selangor, Penang, Kuala Lumpur and Putrajaya have been closed for the rest of the week, while more schools across the nation were ordered to close to protect students and teachers from the smog.

The school closures resulted in over 1 and a half million students finding themselves out of school as Education Minister, Dr Maszlee Malik advised all students to stay home and reduce outdoor activities throughout the haze season.

Now, since the kids have no school, working parents have no one to watch their kids at home.

This has apparently pushed some parents to request medical certificates (MC) from health officers and doctors so they can stay home and watch their kids?

The issue was raised by Facebook user Dr Kamarul Ariffin, who explained the situation to his followers from a doctorâ€™s perspective.

He discusses how such situations tend to arise every time schools are closed due to safety and health concerns, such as during haze, food poisoning, and chemical pollutions.

According to him, every time schools are closed, there will be parents who request for MCs.

He says that doctors feel guilty: on the one hand, these parents donâ€™t qualify for MC, but on the other hand, who else will take care of these children at home.

Some are of the opinion that doctors should address the requests on a case to case basis at their own discretion.

But Dr Kamarul believes that it is the employers of the parents who need to consider giving their employees the day off to watch their kids.

In fact, Dr Kamarul says it is better if the Education Ministry themselves can release a circular to employers of parents whose children are involved in school closures to confirm the fact and request that employees are allowed emergency leave.

He stresses that only patients qualify for MCs saying that clinics are full of sick people who have to wait longer to see doctors due to parents flooding clinics to request for MCs.

To him, the situation is unfair to patients who are actually sick, and unfair to parents as well, acknowledging that parents would not resort to requesting for MCs if there were other options besides leaving their kids alone at home.

At the end of his Facebook post, Dr Kamarul requests for a better environmental crisis management system put into place by the authorities, adding that if there is an existing procedure it needs to be made known.