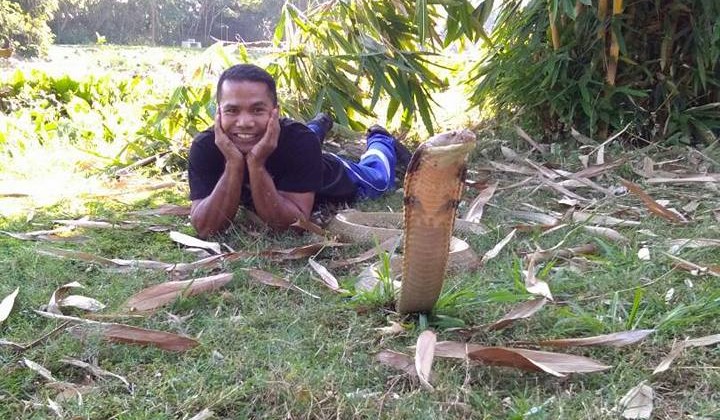 Do you remember this video? The video has resurfaced in Malaysian Reddit (r/Malaysia) recently and it gained some traction as netizens were at awe of how calmly the man handled the snake.

In an ultimate showing of badassery, the man in the video is seen teaching observers how to handle aggressive king cobras, nonchalantly using a specimen of the highly venomous snake.

Speaking in a thick Kelantanese accent, he even casually puts out his leg for the snake to attack, explaining that cobras would usually focus on one target, before moving around the animal to prove his point, reiterating that the cobra would only attack him and not the observers.

The man in the video is Abu Zarin Hussin, a local firefighter based in Temerloh, Pahang, who went viral when videos of him handling snakes surfaced on the net.

Sadly, he died in 2018 after being bitten by a king cobra during a snake-catching operation in Pahang and was laid to rest in his hometown in Kelantan.

During his life, he often documented his interactions with these snakes and there are even pictures of him kissing king cobras.

His talents in handling king cobras caught the attention of foreign media, going as far as the United Kingdom, but for the wrong reasons as the UK tabloid Daily Mail alleged him to be a Thai man who married a pet serpent because it looked like his dead girlfriend.

His presence in the public sphere wasn’t only confined to headlines in news portals as he also appeared in the reality tv competition, Asia’s Got Talent in 2017.

His antics with the snakes were often documented on his Facebook page where he’s seen doing various everyday activities, accompanied by venomous serpents.

He even had a YouTube channel with videos of him handling the snakes, one of which was uploaded in 2013 garnering 6 million views.

The local media even called him the “snake whisperer” – based on a popular 90s movie for his abilities and proficiency when it comes to taming and capturing snakes.

Passed down to future saviours

During his time attached to the fire brigade, Abu Zarin used to conduct snake catching and training classes for firemen, as they’re often tasked with capturing serpents in homes or public places.

He used to head the Fire and Rescue Department’s King Cobra squad that was established in 2015.

The knowledge passed down from him proved to be beneficial towards the squad as they produced capable firefighters such as Noor Fazida Tina Mohamad Noor, a mother of three who is the only female officer in the squad.

Just like her mentor, Noor Fazida also went viral in 2019 when she caught a wild king cobra in Rawang, awing netizens who showed their respect for her courage and expertise in capturing the animal.

Aware of the dangers

Although he often would tame and capture cobras, Abu Zarin was well aware of how dangerous these serpents can be.

He once fell into a coma for a few days after being bitten in 2015 and the incident almost cost him his life.

His mother said that Abu Zarin had always been courageous since a very tender age and would often follow his father to capture these reptiles.

During his life, he loved all sorts of wild animals and even claimed to have kept 4 snakes in his house and engage in wholesome activities such as playing with the snakes, watching tv together and even sharing the bathroom with them.

His wife often warned him how deadly interactions with snakes can be and Abu Zarin reassured her that he would stop doing so when they move to Terengganu but he died in 2018 before that wish could be fulfilled.

In the same year, he was posthumously promoted to Senior Fire Officer II for his contributions to the fire brigade.

His death made headlines not only local news portals but it was also covered by foreign media as well.