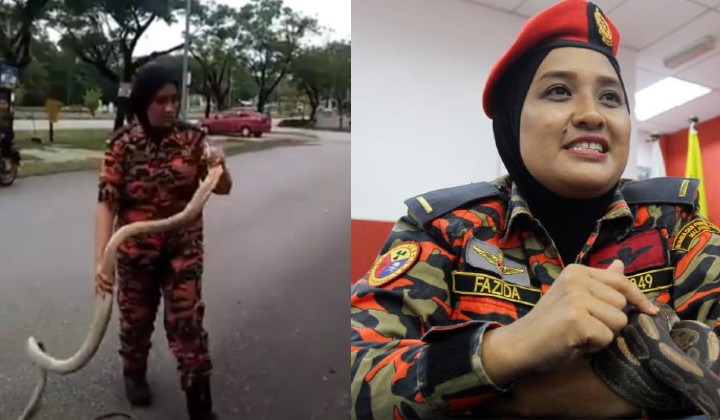 The 45-second clip shared by the FriendsOfBomba Twitter account witnessed the sheer awesomeness of the 37-year-old mother of three, during a routine call to capture a wild King cobra which managed to wander its way into a neighbourhood in Rawang.

The video shows Noor Fazida fearlessly capturing the venomous animal, grabbing it by the head and restraining the animal mere ssseconds.

The video which came out on July 16 had since received over 4,000 likes and 6,000 retweets from Malaysians showing her mad ressspect.

This lady has balls of steel! Mine shrunk just looking at the size of that 🐍!!

“Why wasn’t it a man? Isn’t it usually the men who capture these animals? She just grabbed that snake like it was a millipede! Itâ€™s a snake, not an insect…”

(Women can do terrifyingly awesome things too you know… Just saying…)

Noor Fazida is the first and only woman in Bombaâ€™s King Cobra Squad, a special task force designed to train troops to handle venomous animals (especially snakes…) and educate the public regarding these misunderstood reptiles.

She had even played a major roll in developing a basic training module on venomous creatures currently used as a standard guide for new recruits.

Noor Fazida surely and definitely deserves one big tabik spring in our book.