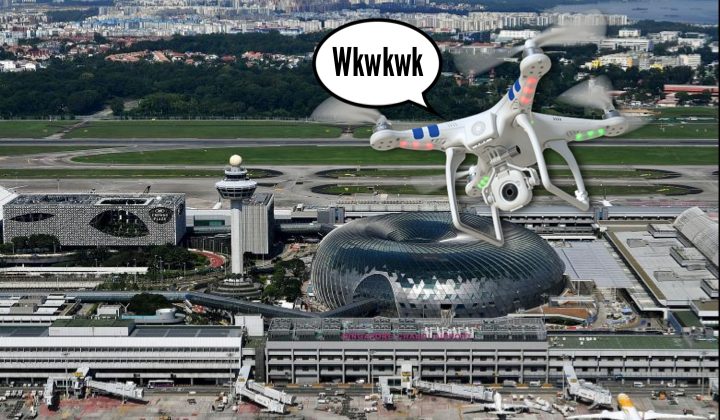 Over the past couple of days, a rogue drone has been flying around Changi airport causing a total of 37 flights to be delayed and one flight to be diverted to KLIA.

In a statement last evening, the Civil Aviation Authority of Singapore (CAAS) said that they had to cease operations at one of the airportâ€™s runways for short periods of time between 11pm on Tuesday and 9am yesterday to â€œensure the safety of aircraft operations and passengersâ€.

Currently, they could not disclose how many drones are flying around the airport and it is not known who the operator is.

Their investigations are still ongoing and CAAS, Changi Airport Group, Singapore Armed Forces and the Singapore Police Force have been activated for search-and-locate operations.

Drones require a permit of use in Singapore and are banned from being flown within 5km of airports and military airbases and at altitudes above 61m.

CAAS said that the illegal flying of unmanned aircrafts may â€œpose threats to aviation or endanger the personal safety of othersâ€.

We canâ€™t imagine who might be flying the drone into Changi airport’s airspace. But we have come up with one possibility: maybe itâ€™s the drone food delivery service guys tengah practice their drone flying skills kotâ€¦