Following a technical glitch with the hill’s funicular train yesterday, services to and from the hill are back to normal today. 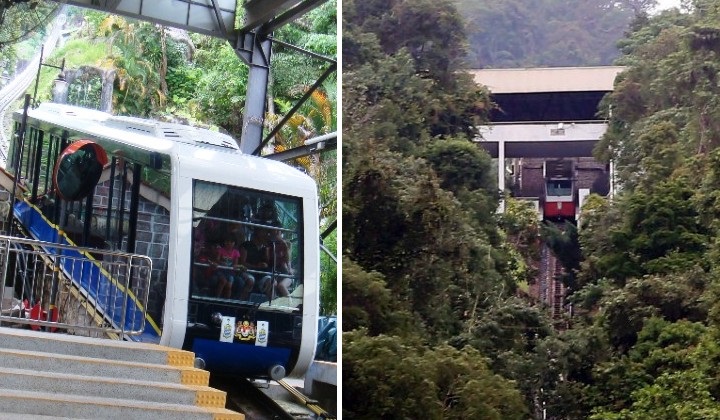 About 150 visitors were stranded in Penang Hill’s funicular train when the service broke down yesterday afternoon (15 October).

The incident happened at 2:10 pm and lasted for an hour affecting two coaches, one going uphill while the other downhill.

The Star reports about 40 people made their way down the hill while another 40 went up to the hilltop. Those who were up top were then brought down promptly to the Lower Station with the support of the jeep services by the Penang Hill Residents Association (PHC).

The Penang Hill Facebook page announced that operations resumed at 4:15 pm and services were back to normal by 4:45 although visitors were told to return the next day, or receive a refund for tickets that were already purchased for the day.

It seems an error in the drive system had triggered the safety mechanism and caused the brake system of the funicular coaches to lock up, preventing them from moving forward.

We have spares for the track brake after learning our lesson all these years. We ordered new ones during the movement control order period and are still waiting for its arrival.

It was announced on their Facebook that Penang Hill funicular services were to reopen to visitors following the National Recovery Plan and announcement made by the Federal Government.

The first trip starts at 6:30 am followed by 7 am and then in hourly intervals daily until 9 pm.

Penang Hill, also known as Bukit Bendara, is a popular destination located within the Air Itam suburb, about nine kilometres west of the centre of George Town.

Visitors and locals often visit the hill for its vistas. It is also popular among nature lovers for its flora, fauna and rainforest experience, and also its hiking trails.

The Penang Hill funicular train service is back on track as of today (16 October) and each trip will have a 50-passenger limit, which is 50% of its total capacity.

A strict SOP is also in place.