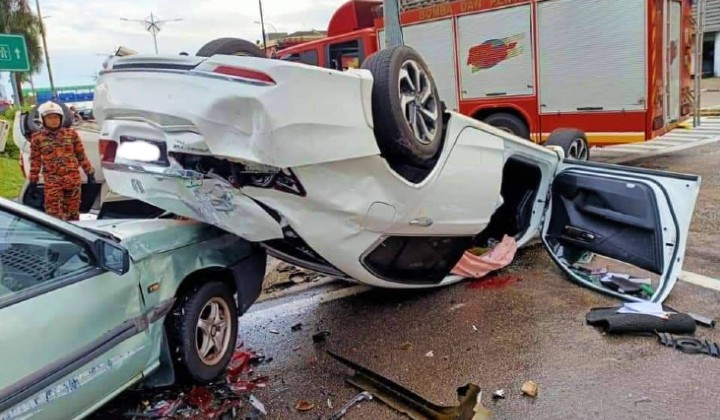 Recently, a horrifying car accident in Johor Bahru shocked Malaysians. A white Myvi was seen speeding and crashing directly into a Honda Accord and a Proton Iswara stopped at a red light, killing the driver of the Honda Accord instantly.

The driver of the white Myvi was speeding on a mild downhill slope after rain in the daytime, losing control of her car and crashing into the waiting cars at the intersection.

The Honda Accord was flipped upon impact. The driver was a 31-year-old Navy officer, who leaves behind a wife and 3 young kids.

Fire and Rescue Station (BBP) Larkin Operations Commander Senior Fire Officer II Nordatul Badrol Abd Rahman noted that the car was extremely badly damaged, requiring a team of nine and special equipment to remove his body which was trapped in the driver’s seat.

The 23-year-old driver of the white Myvi suffered an injury in the head and neck and is currently receiving treatment at the Sultanah Aminah Hospital Ward.

Investigations later revealed that the driver of the Myvi did not have a driver’s license and the road tax of the vehicle expired just days ago on 8 October. She also tested positive for drugs, and will be investigated under Section 15(1)(a) of the Dangerous Drugs Act 1952.

Johor Bahru Selatan District Police Chief Assistant Commissioner Mohd Padzli noted that the driver was also under the influence of drugs at the time, and will be investigated under Section 41 (1) of the Road Transport Act 1987.

The driver of the Proton Iswara, the third vehicle involved, managed to escape with only mild injuries.