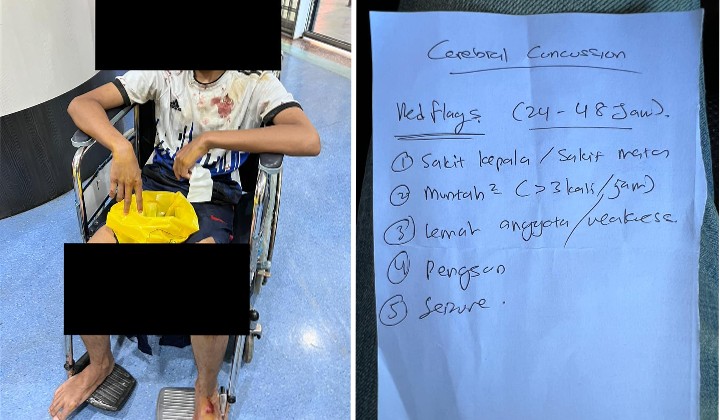 Recently, a government hospital in Kelantan went viral after the mother of a patient made allegations of poor service in a Facebook post concerning an incident that happened at Hospital Pasir Mas on 14 January 2023.

Azimah Abdullah Zawawi posted a lengthy complaint about how her 16-year-old son who suffered facial injuries from a motorcycle accident had to wait for six hours in a wheelchair in the emergency zone of Pasir Mas Hospital (HPM) instead of a hospital bed. He had blood on his face, was vomiting and appeared very weak at the time.

They were brought to the district dental clinic for the officer there to stitch his mouth.

“I’ll stitch up what I can, yaa,” said the officer there and her son was allegedly left there with his mouth open for 30-40 minutes, unattended.

After the stitch, the boy was referred back to the Emergency Department (ED) and the doctor gave Azimah a note saying these are the symptoms that she should look out for. The doctor was discharging him and told that they could refer their son to Raja Perempuan Zainab II Hospital (HRPZ) tomorrow morning for further treatment.

Worried about the condition of her son, Azimah asked if her son could be admitted but the ED doctor denied her request, stating that the beds were full. She also asked if they could be referred that same night to HRPZ but were allegedly declined, with the same excuse saying the beds were full.

Disappointed, Azimah and her husband took their son to another hospital that same night, worried about his condition.

At the Universiti Sains Malaysia Hospital (HUSM), their son was straight away placed in the yellow zone. An officer had to ask for permission to open the stitches on his mouth, claiming it was poorly done. They also cleaned some wounds on his stomach that the earlier doctor allegedly missed.

Properly diagnosed this time, it turns out that their son had a broken chin and a fracture in his face.

Azimah wondered why the ED doctor decided to discharge her son when he was indeed in desperate need of medical attention at that time.

Netizens chime in with their own complaints

Many who commented agreed with the mother airing her grouses on social media, with some alleging their previous complaints had no effect.

Some even shared their own personal stories in the comments section of Azimah’s, State Department’s and MOH’s Facebook posts.

“This is the only hospital I ever wrote a complaint on and submitted it in the Complaint Box. I wrote about their staff 8 years ago. I’ve been to a lot of places in Malaysia (Seremban, Tanjung Malim, Skudai, Batu Pahat) and have never felt the need to complain about any of the other hospitals I’ve been to. I hope this situation will improve.”

“This has been going on for ages. My late mother was once treated in this hospital. They only put her on IV and did nothing else. They then transferred her to the HRPZ hospital after quite a while and the doctor there told me there was actually internal bleeding in my mother’s head. It was too late then and she suffered a stroke already.”

“This is not a matter of miscommunication, but a matter of problematic staff and doctors at Lati Hospital (another name used to refer to the Pasir Mas Hospital). My mom had dengue one time and I took her there. They told me to go back home. When I took her to another nearby hospital in Kota Bharu, my mom was straight away admitted to the Red Zone. I hope MOH will investigate thoroughly on this matter.”

Some think this is because of understaffing

Some commenters think that the doctors were misunderstood. It’s not their fault, but rather the management’s fault for having an understaffed hospital.

“My husband worked in the emergency zone at HPM once and decided to quit. You should not blame the doctor, you should blame the higher-ups. The doctors work like zombies.”

Other commenters think the family is blowing this out of proportion and that they didn’t fully understand the doctor’s job scope there.

Another user thinks that if they want better service, they should’ve taken their son to a private hospital instead.

Kelantan State Health Department director Dr Zaini Hussin, in a statement yesterday said they were concerned with the situation and had initiated an investigation.

“JKN Kelantan finds several aspects that need attention such as communication problems which resulted in the complaint.

“Therefore, Pasir Mas Hospital will conduct an ongoing investigation and consultation with all parties involved, including patients and families.

“The Kelantan State Health Department takes this incident seriously and will take comprehensive action to ensure the delivery of high-quality healthcare that prioritizes the customer by emphasizing professionalism and caring in line with the mission and vision of the Ministry of Health.”