Ismail Sabri and Zahid have known each other since 1973 and both leaders denied allegations of a rift between them. 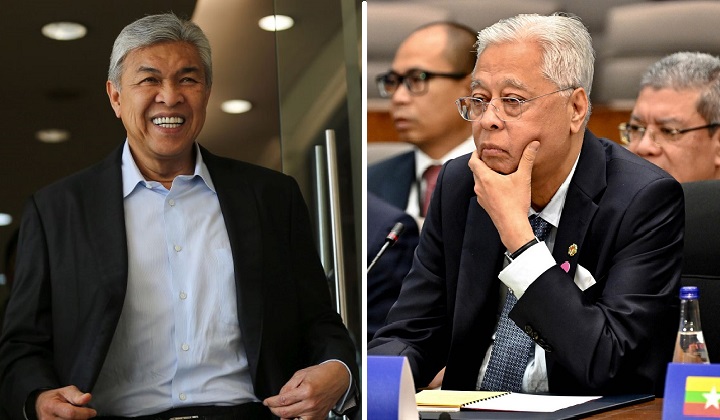 UMNO President Datuk Seri Ahmad Zahid Hamidi and the party’s vice president Datuk Seri Ismail Sabri Yaakob both dispelled rumours of a feud between the two when they appeared together in Barisan Nasional (BN) Solidarity, Stability and Prosperity programme at the Bagan Datuk Umno Complex in Perak yesterday.

On his full-day visit to Perak, caretaker prime minister Ismail Sabri appeared in the programme held in his party boss constituency in Bagan Datuk.

“Both the president and I are united, but the Opposition wishes to see us apart and divide us, so it will benefit them,” Ismail Sabri was quoted as saying by The Star.

Ismail also said that he and Zahid go way back.

“We have been friends for a very long time.

“I have known him since our school days, and I also know his wife since their courtship.

“We must be united to ensure a huge victory in the 15th General Election, and we need to stop the slanderous remarks, otherwise we will lose out.

“When outsiders talked about factions in Umno, both of us sat down and said we had to put an end to this,” said Ismail.

Zahid: “We know each other since we were young”

According Ahmad Zahid, he had befriended Ismail Sabri when he was still back in university in 1973.

“During my first year at Universiti Malaya, my roommate was Ismail Sabri’s brother (Kamarazaman Yaakob) and he (Ismail Sabri) was studying in a technical school every weekend. He used to come to visit his brother.

“What have I not done with him – I have hugged him, kissed his cheeks, the only thing I have not done is kiss his mouth, that is ‘geli’,” he said in jest.

The BN chairman also slammed the Opposition for continuing to harp on the narrative that the upcoming 15th general election will take place during the monsoon season, pointing towards that the previous Melaka state election too was held in November.

“When does it not rain in Malaysia? Taiping is the wettest town in the country. It rains daily.”

“Does that mean elections should not be held there forever?” he asked.