He said it’s his Constitutional right to not get vaccinated. 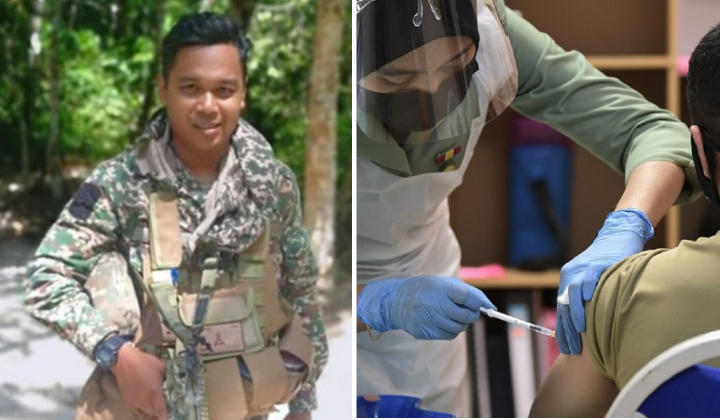 The former sergeant who was given the boot for refusing to take the Covid-19 vaccine by the Malaysian Army (TDM) now wants to file a judicial review leave application for his dismissal.

Based on reports, Sharull is the commanding officer of the camp while Azammunir allegedly is the officer who signed the resignation letter.

Both of them were considered to be under the supervision, control, direction and law as well as policy administration of the other three respondents.

The 39-year-old seeks a declaration that the resignation letter dated 4 August this year, as well as the termination of his service which was claimed to be invalid and had no effect.

Reports cited the cause paper, where Wan Ramli claims that he received instructions at the Rasah Camp clinic to take the vaccine on 3 July but refused because he exercised his constitutional right not to be vaccinated.

The sergeant then underwent several interrogations for several days – July 5, 6 and 9 – in which he claimed he was allegedly “placed under extraordinary pressure and scolded by some officers for refusing to be vaccinated

On July 10, it’s reported that he was tried by Sharull and charged under four provisions of the Armed Forces Act 1972:

Reports state that the former sergeant was told that his resignation would take effect on 26 August this year, which is earlier than previously scheduled date of January 20, 2023.

As a result of his dismissal, according to FMT, Wan Ramli has lost his right to a pension under Article 147, which is a right protected under Article 13 (1).

This, he said, violates his rights as a citizen and member of the armed forces, under Articles 5 (1) and 8 (1) of the Federal Constitution.

Wan Ramli also asked to be charged by the Court-Martial, but was rejected by Sharull, whom he said denied fair procedure for him.

According to the ex-sergeant, the respondents considered the matter irrelevant, misinterpreted the provisions of the Armed Forces Act, were irrational, biased and oppressive.