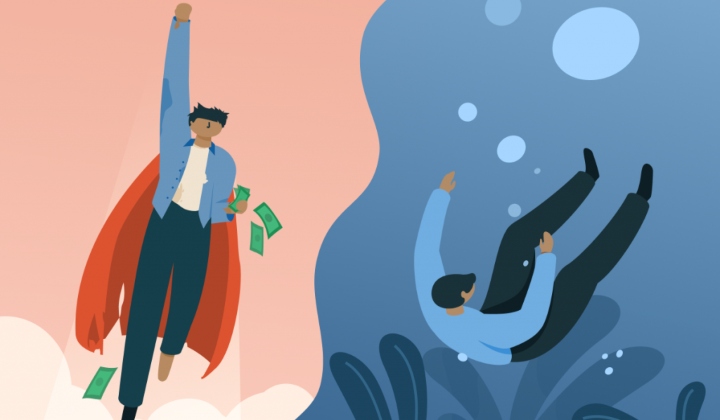 One day I’m too depressed to leave the bed and just watch TV all the waking hours, another day I am on the Kerinchi Link in the hot sun, barefoot and directing traffic with a keris; delusional and hallucinating that I’m a dewa sent down to restore peace and balance to the world.

This was the event leading to my diagnosis. I am bipolar.

What is bipolar disorder ?

Bipolar is a mood disorder, previously known as manic depression, it is a mental disorder characterised by periods of depression and periods of abnormally elevated mood that last from days to weeks on end.

If the elevated mood is severe or associated with psychosis (that is, a break from reality), it is called mania. When less severe, it is called hypomania.

During mania, one behaves or feels abnormally energetic, happy, or irritable, and they often make impulsive decisions with little regard for the consequences.

There is usually also a reduced need for sleep during manic phases. In fact, every episode I’ve had always begun with a lack of sleep.

Eventually escorted to the psychiatric ward and sedated, at the time it seemed like so much fun. The consequences and trouble caused for everyone involved was more regrettable, and the following depression even more so.

Researchers believe it is to do with the intricate wiring of the brain. A healthy brain maintains strong connections between neurons through a system of neurotransmitters, and the brain has the ability to prune these and remove unused or faulty neural connections.

Using magnetic resonance imaging (MRI), it is apparent that this pruning ability is less effective in minds effected by bipolar disorder.

There is also a genetic component to bipolar disorder that is evident as it tends pass down from generation to generation. Although there isn’t a bipolar gene per se, there is a strong indication that those effected by the disorder tend to have family members also afflicted.

After receiving the diagnosis, I resisted it for many years. Refusing to believe that there was something wrong with me. Coming to terms with the fact that ‘I’m just different’ was a bitter pill to swallow.

Eventually, accepting that it was simply a lens through which people tried to understand me, I realised that it’s a label that doesn’t have to define me. It didn’t necessarily mean that I was out of my mind or insane. I’m just different, it doesn’t have to be a bad thing. In fact, it can be wonderful.

Mood stabilising medications such as lithium have long been the front line defence against mood disorders. Anti-psychotic medications are also used in cases when patients experience symptoms  such as delusions, hallucinations and other psychosis.

In the more severe cases, electro-convulsive therapy (ECT) is used to jolt the brain into rewiring its neuro-pathways into reconnecting. Although patients may experience some disorientation in the days after the process, ECT tends to have an over all positive effect in patients in the long run.

Apart from the stigma faced by people with mental illness, strong cultural beliefs deter those suffering from mental disorders from getting treatment.

Here’s the bright side

Here are some of the elements of bipolar disorder that are considered advantages:

Productivity. People with bipolar disorder sleep less as they become manic and have more energy. As a result, they are often more productive than their peers, at least for a while.

The lack of sleep and high-energy work can eventually lead to burnout and may contribute to symptoms of psychosis, such as paranoia and hallucinations.

Confidence. Feeling more self-confident is one of the benefits described by people with bipolar disorder.

Unfortunately, as mania increases, this self-confidence can become unrealistic fantasies about power and success, leading to poor life choices and impulsiveness.

Charm. Along with greater energy and self-confidence, people with bipolar disorder may be more outgoing and charming as their mood improves. This can draw people to them, making them the life of the party (for a while).

However, as mania progresses, increasing irritability, impulsiveness, irrational behaviour or speech, and risk-taking also can drive people away.

Euphoria. Intense joy and pleasure in life, including a heightened awareness of details, may also be experienced by bipolar patients as they approach mania.

This perception of the world in bright and beloved detail is often what patients cite as the most missed element of bipolar disorder.

Insight. Many people with bipolar disorder experience a feeling of greater intellectual ability and insight as they approach mania.

Helping those with bipolar

A strong and healthy support system in friends and loved ones are a tremendous help in recovering and coping with the disorder.

Lending a sympathetic ear, or a shoulder to cry on, the simple act of being there can be a great help to those suffering from this disorder.

Having someone to talk to, even though they may resist the attempts of socialising, a little insistence like going over for a cup of tea or coffee can mean the world and help significantly.

If you or someone you love is effected by the disorder, know that you are not alone. Don’t be afraid to reach out and seek professional help. You could very well save a life.

The book shows the effect of manic-depressive illness in family and romantic relationships, professional life, and self-awareness, and highlights both the detrimental effects of the illness and the few positive ones.