The managing director of CinemaBlend, Sean O’Connell, said the film was made for the Asian director, her family and friends. 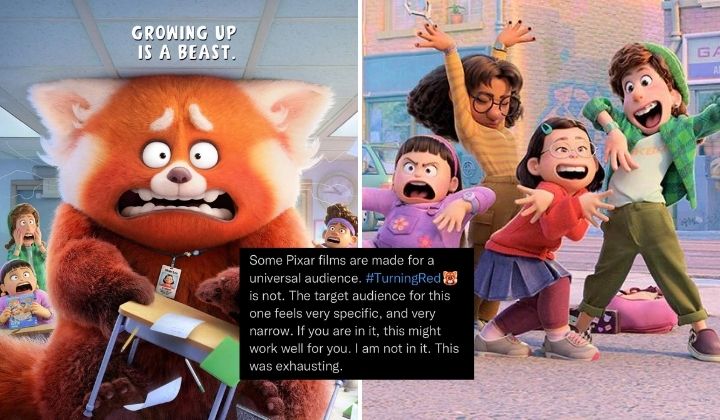 The new Pixar film Turning Red is a coming-of-age story about a 13-year-old Chinese Canadian girl named Mei who lives in Toronto. She discovers that she can turn into a giant red panda whenever she’s overcome with emotions.

What was supposed to be a nice story received a ‘racist’ and ‘sexist’ review from CinemaBlend’s managing director Sean O’Connell.

Some Pixar films are made for a universal audience. #TurningRed is not. The target audience for this one feels very specific, and very narrow. If you are in it, this might work well for you. I am not in it. This was exhausting.

CinemaBlend Managing Director Sean O’Connell wrote this in a tweet that accompanied his review.

In the article, he said the film is specifically made for the Asian director, her friends and her family members.

I recognized the humour in the film, but connected with none of it. By rooting ‘Turning Red’ very specifically in the Asian community of Toronto, the film legitimately feels like it was made for [director] Domee Shi’s friends and immediate family members. Which is fine — but also, a tad limiting in its scope.

Senior Editor of Backstage Vinnie Mancuso said that it was a terrible criticism by O’Connell.

God, this is terrible criticism. Writing about art requires empathy. “This wasn’t made for me” is a starting point, not THE point pic.twitter.com/sbc7BjE9Bi

Due to the backlash online and by members of the press, O’Connell’s review has since been taken down from CinemaBlend’s website.

We failed to properly edit this review, and it never should have gone up. We have unpublished it and assigned to someone else. We have also added new levels of editorial oversight. Thank you to everyone who spoke up.

O’Connell also issued an apology on Twitter and said he didn’t explain his point of view well but appreciated the feedback.

I’m genuinely sorry for my Turning Red review. Thank you to everyone who has reached out with criticism, no matter how harsh. It is clear that I didn’t engage nearly enough with the movie, nor did I explain my point of view well, at all. I really appreciate your feedback.

Despite pulling the review, not everyone was satisfied with how the matter was being managed.

According to Variety, Entertainment Weekly digital editor Yolanda Machado pointed out that the article was written by a Managing Director and no amount of editing could erase the racist tone.

This was written by your MANAGING DIRECTOR not some junior writer. As an editor, there is no amount of editing that would have erased the racism. What are you doing to make sure he is held accountable and this doesn’t happen again? (has happened before!)

How did netizens react?

Netizens wasted no time to point out how flawed O’Connell’s movie review was.

A netizen said that it was interesting to see somebody’s reaction to a movie that wasn’t “made for them” while someone else said they could just relate to the characters as people too.

just… relate to the characters as people? I’ve had to relate to plenty of white characters growing up. why does a character being Asian suddenly make it “non-universal”?

Most netizens poked fun at O’Connell, specifically when he wrote that he couldn’t fully enjoy the film because he shared nothing in common with the character.

Some animated films are made for a universal audience. Transformers: The Movie is not. The target audience for this one feels very specific and very narrow. If you are a robot who turns into a car, this might work well for you. I am not. This was exhausting. pic.twitter.com/9j7kPKdBnZ

The reason I love Monsters, Inc is clear: I am a monster who works in a monster factory

I have been asked to relate to so many orphan boys in my life. How did I, a girl with living parents, ever manage?

This film is very limiting as it was clearly made for single dads pic.twitter.com/yDWWhmcBRv

Another netizen added that learning about different cultures should be fun and just require some effort to learn if it’s something new to you.

This was exemplified by a fellow film critic Dan Murrell who shared that the fact that he shared nothing in common with the characters was the reason why he loved the movie.

You realize, watching things that have different cultures and learning about the cultures should be FUN. If you’re so upset about something being so “out of the norm” that’s on you. Other cultures aren’t “confusing and weird”, you can learn about them with a little effort.

I loved this movie BECAUSE I shared nothing in common with most of the characters. I didn’t find it exclusionary at all – it actually brought me IN to Meilin’s life. To only be able to understand stories about people exactly like you is the opposite of what movies are about.

At the end of the day, the issue once again showed how important it is to welcome and celebrate different stories in media.