No spoiler but there’s a little hint from Marvel boss Kevin Feige. Don’t scroll to the end. 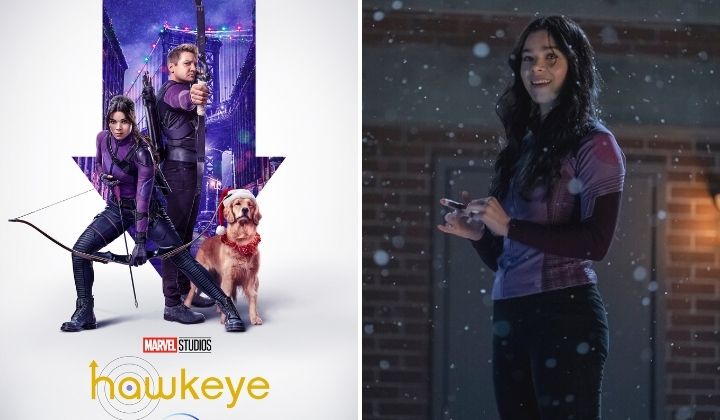 After what seemed like a long wait after Marvel Studios’ What If?, fans can finally count down the days to the premiere of Hawkeye on Disney Plus Hotstar with their fingers.

He’s trying to make it home for Christmas but is suddenly thrust into helping Kate Bishop, a 22-year-old skilled archer and his biggest fan, to unravel a criminal conspiracy.

Jeremy Renner has played the titular character for more than 10 years since Hawkeye’s debut in Thor (2011).

During the virtual global press conference, Renner joked that he felt like a grandfather of the Marvel Cinematic Universe (MCU) with the boss, Kevin Feige, in the Hawkeye set.

Here’s what we can reveal about the show before it premieres on 24 November.

What’s with the entire Christmas and Die Hard-like theme?

According to Feige, setting the show during Christmas week brings some fun and a breath of fresh air for the heroes (and viewers) after going through world-ending stakes, battling with celestials and dealing with the start of the multiverse.

It’s also an opportunity to tell the homey side of Clint Barton that hasn’t been touched in the Avenger films, such as being a father and a mentor figure to the younger heroes.

Did they always know that Hailee Steinfield was Kate Bishop?

Apparently, Hailee Steinfield did not audition but she has always been envisioned as sort of the prototype for the character.

Feige said it was a dream come true when Steinfield said yes to helm the role of Kate Bishop.

Did they go through any training?

Steinfield shared that she went through extensive and varied training such as learning the mechanics of holding the bow and changing the limbs.

She also started circuit training and other exercises to build up the muscles needed for archery.

If you’ve never shot a bow and arrow before, you are sore in places you never knew you could be sore in. It looks so beautiful and effortless, but it’s so hard.

She did stunt training too with her dad who’s a personal trainer and had Renner on hand to kind of guide her into the world of MCU filmmaking.

Funnily, she said she didn’t believe Renner at first when he said they were not going to shoot any real arrows.

A bow is a weapon without any arrows, and I had to learn how to fight with just that.

Did Renner and Steinfield do any special activities to build up their characters’ bond?

With Renner acting as a guide for Steinfield in the world of MCU filmmaking, the effort to build up the characters’ bond happened pretty much naturally.

Steinfield explained that the banter between Clint and Kate was similar to the banter she has with Renner.

She’s wonderful to work with and very fluid. I took on the role of shepherding her into how Marvel Studios works—all the stunts, the chaos of schedules—there’s always a lot going on. I tried to protect her as much as I could, and she just fell into trust with me. I have absolute respect and love and admiration and trust in her. You have to have that, I feel, for true art to exist. We had to trust each other and just go for it.

Who are the other new characters?

Actor Tom Dalton plays the character known as Jack Duquesne aka Swordsman. In the comics, Duquesne is Barton’s mentor who taught him how to use bladed weaponry.

The character’s backstory and relationship with Clint Barton will be re-imagined in the series.

To prepare for the role, Dalton didn’t reveal much about the training he did other than stunt training and revealed he has a fencing background.

Farmiga said the transition from horror franchises to the MCU felt amazing. The moment they pitched the idea to her, she was all in for the ride.

What convinced Farmiga to take on the role?

Interestingly, Farmiga shares that she’s an archer herself, so playing a parent to a young skilled archer seemed fitting.

It turns out that Farmiga has played an archer herself in a series called Roar with the late Heath Ledger.

Is Marvel’s Phase Four setting up the arrival of Young Avengers?

The rest of the cast played off the question. However, Steinfield said she’s just grateful to be a part of the show and the Marvel universe.

“It’s only the beginning. The show’s not even out so I’m looking forward to that day,” she added.

Which future MCU movies or series will connect with the Hawkeye story?

Despite keeping mum about introducing the Young Avengers, Feige shared that the upcoming Echo series, which was announced on Disney Plus Day, will have a direct connection to the story in Hawkeye.

The Echo series will see the return of Maya Lopez, aka Echo, played by Alaqua Cox from the Hawkeye show.

Echo is a deaf Native American superhero who can perfectly copy another person’s movement and fighting style.

Remember to catch Hawkeye on Disney Plus Hotstar, with new episodes every Wednesday.