Steve said he was proud of us and everyone is crying now. 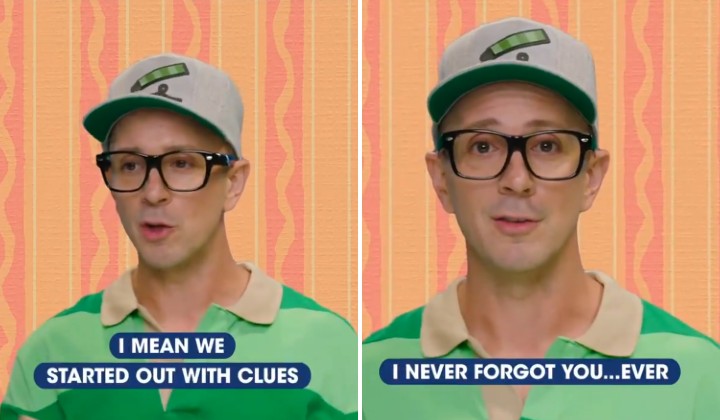 Steve, the original host of Blue’s Clues, returned for a special 2-minute message for Blue’s Clues 25th Anniversary. The short video is directed at the kids who watched the show who are now all grown up.

In it, Steve Burns reprises his role as Steve, and discusses his abrupt departure from the show before passing it on to the next host, his brother Joe.

In the show, the character Steve was leaving for college. In reality, it was because actor Steve Burns was rapidly losing hair due to male pattern baldness and did not want it shown to kids.

So about that time Steve went off to college… #BluesClues25 pic.twitter.com/O8NOM2eRjy

The video is an uplifting and extremely heartfelt message about how, although things have been hard, all of us have accomplished so much.

He speaks to and addresses his audience directly, as he has on the show. In Blue’s Clues, Steve regularly speaks to the audience and asks for help ‘finding clues’ with his puppy Blue.

After all these years… I never forgot you. Ever.

Most of us who watched Blue’s Clues are now in their late 20’s and early 30’s, having gone through all the difficult adult things like college, stepping into the workforce, global crises, and financial struggles in a depressed economy.

Most vieweres were caught off guard by Steve’s calm voice and positive message, leaving us feeling like children again.

As young children, watching Steve leave was devastating. Some netizens even likened it to their ‘first breakup’.

A good amount of netizens were moved to tears (like me, who cried into the keyboard for half an hour), so if you need a moment or two in private with a tissue, you’re not alone.

It’s honestly nice hearing Steve still talking to us in character after all these years. No matter how much time has passed since we said goodbye, it just makes the next time we say hello all the more joyful pic.twitter.com/kFkRKcc5dE

Thank you Steve. I just wanted closure. Glad to see you doing well. Thanks for not forgetting about us 😭😭😭 pic.twitter.com/MAReKNmOgx

and here I am, a full-grown adult, crying over this video. Blue’s Clues was my favorite show as a kid, I still remember watching it in my grandma’s old house, and I truly hope Steve knows how much his place in our childhoods meant to a lot of kids.

Still got Steve's notebook to this day 📒 🖍

You truly were the best host thanks for sticking with me throughout my childhood ✌ pic.twitter.com/I9fZKCcx4u

If you’re a fan of Steve and Blue’s Clues, you might want to find a quiet corner to watch this video.