PN’s Covid-19 measures seem to work, so why aren’t they being applied to to all? 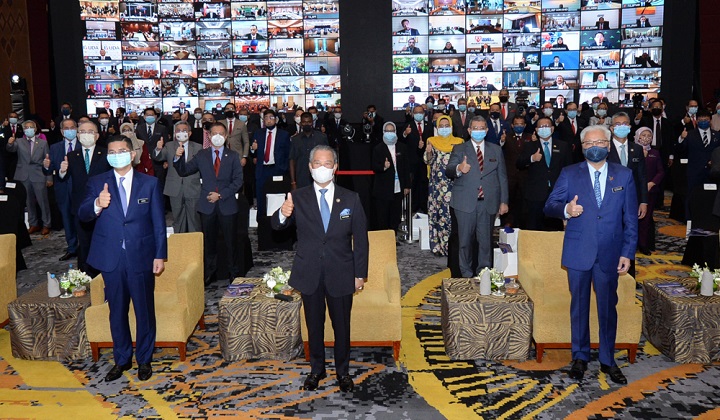 The first half of this opinion piece is mostly statistics. If you would like to jump to the conclusion, click here.

I get it. It’s not easy to administer a country during a pandemic which has globally killed 2.68 million people and caused the deepest economic recession since World War 2.

Furthermore, gaining control during a period of political upheaval instead of by general elections makes the government an easy target whether the criticisms are fair or unfair.

After a year of lockdowns, you could say the current Malaysian government isn’t doing great, but to be fair neither is it doing terribly bad if the main goal is to save lives.

At the time of writing, Malaysia has a Covid-19 death toll of 1,218 and a population of 32 million, which means for every 1 million people living in Malaysia, 38.12 have died from the virus.

The Sinovac vaccine is also being administered starting today as well, with jabs for high-risk individuals coming soon in Phase 2.

Financially, while a small group of Malaysians are doing fine, most of us are feeling the squeeze and some, especially the poor and those in the travel, tourism, entertainment and event industries, are either ruined or close to it.

This is despite bullish statements from the Finance and International Trade and Industry Ministers and frequent announcements of stimulus packages, a lot of which comes in the form of cash handouts to low-income households and corporate subsidies.

With the roll out of National Covid-19 Immunisation Programme, paired with the comprehensive economic recovery plan implemented by the government, things are likely to be on track by year end, Inshallah.

We are in this together 💪🏻🇲🇾📈💉 https://t.co/zqLzZcvdhY

The World Bank last year pointed out that while income inequality here had been gradually declining, it’s high compared to other East Asian countries and Malaysia’s Bottom 40% (B40) are very “vulnerable to economic shocks as well as increases in the cost of living and mounting financial obligations”.

Furthermore, the World Bank said that while there has been income growth for the B40, the absolute gap across income groups has increased and there is widespread perception of the poor being “left behind.”

In other words, while the rich are getting richer, the poor are still getting poorer and because of Covid-19, the middle-class probably aren’t in the first group.

What’s the point in discussing all this?

Well, it shows that for the most part, policies like the lockdowns and efforts by healthcare workers and other frontliners to fight the virus have worked, even if they hurt most of us financially.

Which is why it is so frustrating to consistently see people at the top, who would be least effected financially by such policies, ignoring them.

Authorities have said that the law applies to all, but the public perception would not agree.

Just this past weekend, screengrabs of an Instagram post showed Ministers and politicians attending the wedding of an MP’s daughter in Negeri Sembilan despite interstate travel being banned.

There are even Deputy Ministers and Ministers who appeared to have spent months overseas or on leave, though it was probably more telling that their absence went largely unnoticed.

This is all taking place as the maximum fines for those breaking Covid-19 restrictions have been raised to RM10,000 for individuals and RM50,000 for companies.

After a year of ever-updating SOPs and irregular enforcement, the new fines have added to the confusion as they were implemented before the guidelines surrounding them have been published.

Defacto Law Minister Datuk Seri Takiyuddin Hassan held a press conference saying discounts would be given if people paid early or if they were first-time offenders but that did very little to soften the blow.

For most people, a fine of RM5,000 is just as unpayable as a fine of RM10,000 and leaving it up to District Health officers to handle how much to fine people has raised even more issues.

I get it. It’s meant to be a deterrent, but do you know what would be a much easier and better deterrent?

If those setting the rules adhered to them and if they went against the rules, they were punished worse than the rest of us.

That might work a little better and limit criticisms against the government to things that are mostly unfair.