In the Navy’s 86-year history, since it’s inception in April 1934, there has never been a woman of that rank. 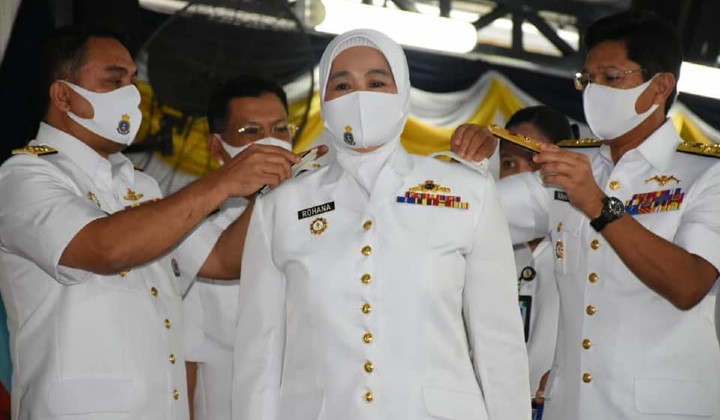 Captain Rohana Jupri has made history to become the first woman to be promoted to the rank of First Admiral (Laksamana Pertama) in the Royal Malaysian Navy.

In the Navy’s 86-year history, since it’s inception in April 1934, there has never been a woman of that rank.

I hope there are more women candidates who can follow in my footsteps. There is room available for women in RMN to grow

The 57-year-old mother of four who is originally from Tanjong Karang, Selangor joined the Navy on 20 December 1984.

On top of that, Rohana also acquired important assets that ensured Ops Benteng could be implemented efficiently.

Ability and credibility recognised by RMN

Since the establishment of the RMN 86 years ago, not a single woman has been promoted to the rank and this is an achievement for her.

Rohana was among four senior officers who were promoted during a ceremony launched by Commander Admiral Tan Sri Mohd Reza Mohd Sany at KD Sri Gombak on Jalan Padang Tembak in Kuala Lumpur.

On Rohana’s promotion, Mohd Reza said it proved that Rohana’s ability and credibility was recognised by the top management at RMN, as well as a sign of appreciation for her efforts in her years of service.

He revealed that Rohana had also held the position of Senior Director of Materials at the RMN headquarters, and Assistant Chief of Staff (AKS) J4 (Logistics) in the National Task Force.

He added that this indirectly placed her on par with the top line-up of the Admiral Committee (JLAKS) previously pioneered by men.