The homeowner had time to lock the door when the robber slipped on the floor mat. 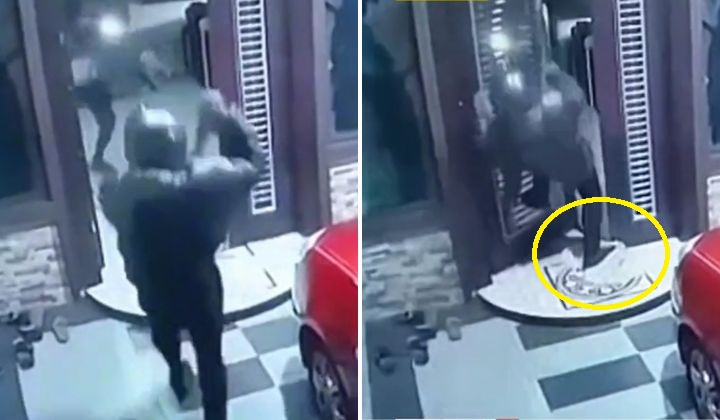 A video recently went viral when it showed a homeowner in Ipoh narrowly escaping with his life during a robbery.

A robber, clad in a helmet and wielding a parang, tried to barge into the house through the front door.

Fortunately, the robber slipped on the floor mat that was placed outside the door which gave the homeowner ample time to shut the door in the robber’s face.

The robber then left the house after failing his task.

Ipoh OCPD Assistant Commissioner Yahaya Hassan said the incident occurred on 5 August around 6.40am at a house in Taman Tasek Indra.

The Star reported that the case is being investigated under Section 393 of the Penal Code for attempted robbery.

Anyone who has information or witnessed the incident is urged to contact investigating officer ASP Fadli Ahmad at 019-2500019.

Netizens were impressed that a ‘cheap’ mat, not a sophisticated security system, managed to save a person’s life.

Some jokingly asked where to get the mat because they want the same mat to ‘guard’ their homes.

With the mat’s sudden high demand, it’s no surprise if the simple mat goes up in price.