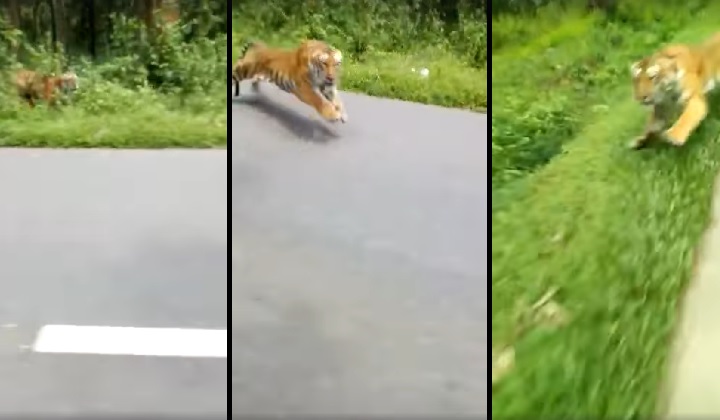 Buttock clenching footage of a tiger chasing after a motorcycle went viral yesterday, sparking both amusement and fear in netizens everywhere.

It seems to have originated on a Facebook page called Forests and Wildlife Protection Society – FAWPS, a nongovernmental organization from the Telangana State in India.

It starts off with seemingly lush scenery, until a tiger jumps out from behind the green bushes and chases after the motorcycle, almost close enough to swipe at the back wheel!

As you hearing the roars of the tiger, itâ€™s understandable as to why the pillion rider recording was screaming as well.

As terrifying as that may sound, fret not, this did not happen in an open area. While netizens were debating about the location, we managed to get to the bottom of it.

The videoâ€™s source was actually from a wildlife sanctuary in Kerala, India, and the motorcyclists are forest-department officials who were patrolling the area after hearing of a tiger sighting.

So no fear, yâ€™all, it is still safe to go exploring around your kampungs!

A reason for the video being a centre of discussion is also due to the increase of deforestation over the years.

As the numbers steadily rise, according to statistics, Malaysia currently holds the record for the highest loss of forests. It doesnâ€™t help that our local Malayan tigers are dying out too.

While illegal logging may be a huge issue, so is poaching. The amount of tigers that poachers have targeted is rather worrisome, considering how they are now an endangered species.

With only 200 Malayan tigers left, it seems more and more likely that they will be extinct in 5 to 10 years.

While we may not see a tiger chasing us on our way to McDonalds any time soon, we should be paying more attention to what we can do in order to preserve our wildlife.

After all, the Malayan tiger is the pride and glory of Malaysiaâ€” as seen in our jata negara!

Chinese Muslim Convert Criticised For Having Beer Signboard, Taoist Altar And Non-Muslim Workers At His Restaurant In KL