The Indonesian Embassy told sources that they are trying to take legal action against the ‘Datuk’ to give justice to all the workers. 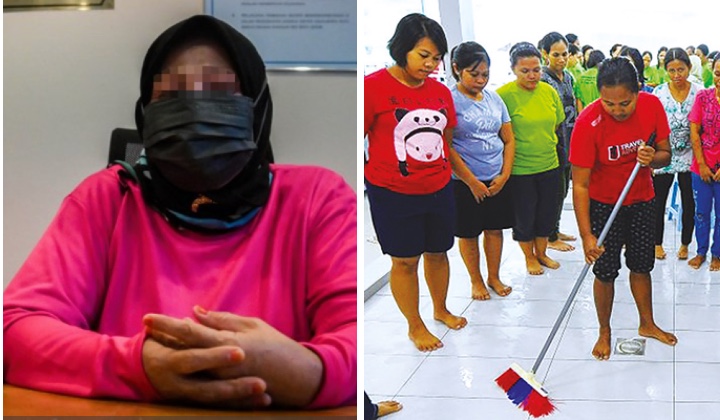 We all want and need to be respected and well taken care of in any job.

But in Malaysia, maids are often mistreated by employers who are anything but kind and considerate.

Recently, a 60-year-old Indonesian housemaid was slapped, kicked and hit on the head with a broom.

Satuni (not her real name) was also insulted every day by her employer, a ‘Datuk’.

Her employer even forced her to work when she was sick with Covid-19.

One Too Many Cases Of Abuse

Unable to stand the torture, she escaped from her abusive employer.

In an interview with FMT, she said the employer kicked her when she was lying down outside the toilet.

The Datuk accused her of acting and shouted at her to get up.

Satuni is currently taking refuge at the Indonesian Embassy in Jalan Tun Razak.

She is waiting to return to her hometown, but the abuse at the hands of the ‘Datuk’ is unlikely to be forgotten.

She had fled with another housemaid and went to the Indonesian Embassy for help.

Yati (not her real name) also said that she was often slapped and beaten, and the torture had been ongoing for several months while working at the Datuk’s house in Shah Alam.

They were lucky because the neighbour was willing to help by sending them both to the embassy when the Datuk went to perform umrah before Aidilfitri during the day.

After staying at the embassy for a few days, Yati and Satuni got the news that the driver, the bungalow guard and another maid, who were all Indonesian citizens, had also fled from the Datuk’s bungalow.

A representative of the Indonesian Embassy told sources that they were trying to take legal action against the ‘Datuk’ to give justice to all the workers, including Satuni and Yati.

The incidents are the latest in a string of abuse cases against Indonesian workers in Malaysia.

It highlighted the vulnerabilities of migrants working as domestic workers in the country.

Meanwhile, the Indonesian government is demanding justice for its domestic worker who had been tortured by their Malaysian employers.

The Indonesians said that the torture needs to be investigated and the law to be upheld, to protect Indonesian domestic workers in future while striking a balance between diplomatic relations and economic ties.

#Indonesian Ambassador to #malaysiagazette, Hermono, was quoted by Malaysiakini as saying that Indonesian maids were vulnerable to abuse and forced labour. https://t.co/7eaKhFcc0L

“… many cases of Indonesian maids who were made to work for years unpaid for their labour as well as those who had their identification papers taken away by the employers…. Indonesians who worked long hours without rest days and those who underwent physical abuse.”

Netizens have also conveyed their stand and condemned what happened.

They considered such actions to be inappropriate and a violation of humanity.

People are waiting to see what steps will really be taken especially when it involves VIPs.