Najib was previously was sentenced to 12 years in jail and a RM210 million fine for cases involving criminal breach of trust, money laundering and abuse of power. 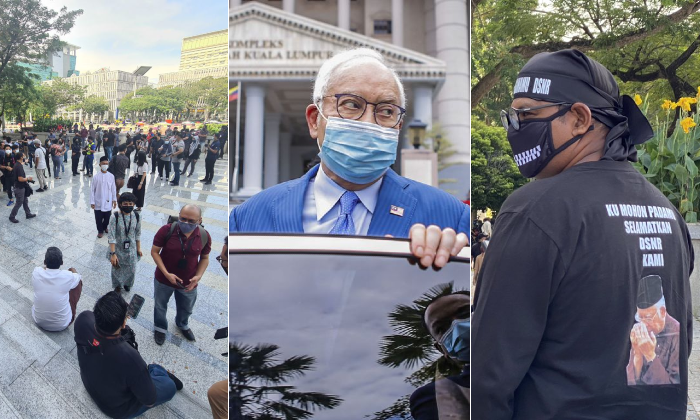 Crowds of supporters, sceptics and members of the media were seen gathering outside the Court of Appeal building in Putrajaya as Malaysia awaited the outcome of Datuk Seri Najib Tun Razak’s appeal against being convicted of misappropriating national funds last year.

The former Prime Minister, Finance Minister and current Pekan Member of Parliament (MP) was sentenced to 12 years in jail and a RM210 million fine for cases involving criminal breach of trust, money laundering and abuse of power.

Online, “Najib” became the trending topic of the day as netizens post away their opinions, criticisms and even some memes depicting the man of the hour.

Images and videos shared by mostly the press on social media spotted a large mob assembled at the court’s steps and surrounding areas, along with law enforcement authorities keeping an eye on the scene.

“There’s no national interest when RM42 mil were transferred into Najib’s accounts , only national embarrassment” said Court of Appeal judge Abdul Karim as he read out the unanimous decision of the three member panel. Outside the court complex, Najib’s supporters are gathering https://t.co/P8EBodRIHX pic.twitter.com/fPaKEoUAr2

Also spotted were public health authorities who were said to be there to maintain Covid-19 SOP and safety.

Many of the people in attendance were believed to be fans of Najib as they sported t-shirts and even carried signs in support of the man they affectionately call “Bossku” assumingly in hopes that his appeal goes well.

Najib Razak supporters are not happy with the verdict of the court.

“He’s a son of a nobleman, not a robber, not a bandit!” one lady was heard screaming in a video, praying for justice to prevail.

As they continue to wait, Malaysiakini reports that the court and its judges had unanimously agreed to dismiss Najib’s appeal.