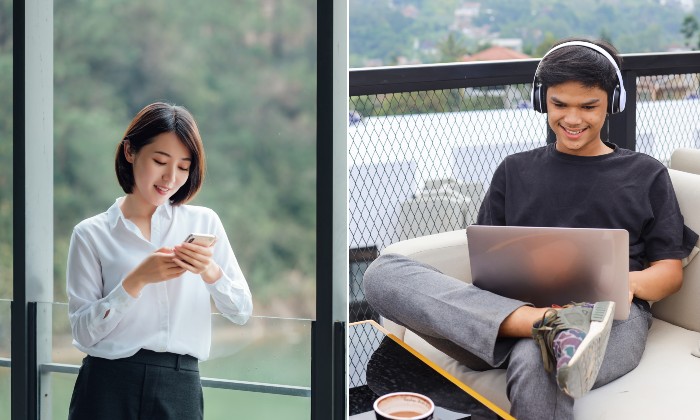 Connecting The Rakyat To The Future

Unlimited potential in how you live, work and play.

Connectivity is the core of future productivity, and Malaysians are ready to be a part of the move towards global digitisation. Today, we are at the cusp of a 5G revolution which will lead us to a future of digitally-powered efficiency and competitiveness with the nationwide availability of high-speed internet.

Designed for speeds up to 100 times faster than 4G, with greater capacity and near-zero latency, 5G will unlock innovation in the digital economy, as well as various solutions for social inclusivity.

As such, there is an urgent need for Malaysia to develop and deploy 5G technology and services, sooner rather than later for what is fast defining each nation’s competitiveness globally.

A Future Of Possibilities: Uplifting Malaysia As A Global Contender

The earlier Malaysia achieves nationwide 5G coverage, the sooner it can reap substantial economic gains. Findings from a recent EY study on 5G’s potential economic impact show a cumulative GDP uplift of RM650 billion over the next 10 years, with RM150 billion in 2031 alone. It is estimated that there would be some 750,000 new high-skilled jobs created by 2030, putting us at an advantage over neighbouring countries.

Meanwhile, the potential uses and benefits for consumers will encompass every facet of daily life, with technology and data set to enhance quality of life indicators from improved traffic and shorter commute time, to optimised utility consumption and recycling waste, faster emergency response, and more. Even experiences such as shopping could be different as retail environments are optimised with immersive AR features.

Truly, there is so much potential with the connectivity of 5G.

Every Second Without 5G Is An Opportunity Lost

4G – A Look Back At Promises Unfulfilled

How often have you felt frustrated with files downloading slower than you expect? It’s times like these that we feel let down by promises of speed and efficiency that we pay for, that often leave us wanting when it comes down to actual delivery.

To make matters worse, the disruptions we face with inconsistent data speeds and coverage not only affect our circumstances here and now, but also snowballs to a point where our livelihoods and businesses can be negatively impacted.

And this problem is widespread, when we look at the highlights and challenges Malaysia faces in its current state of 4G coverage.

As of last year alone, Malaysians’ mobile data usage increased to the highest level in ASEAN at 35.2% year-on-year growth from 2020 to 2021.

And yet, while usage last year peaked, complaints on cellular services surged by 433% compared to the previous year, with 90% of these complaints being related to Network Quality.

Despite this, Malaysians are currently paying the highest average consumer prices for their mobile services compared to their neighbours in the region, at nearly 1.5% of GDP per capita or an average of RM50 per month.

Consequently, Malaysia’s 4G reality is undercut by its low ranking in the region for 4G mobile data speeds.

Globally, we fall behind even further, ranking 81st for quality of mobile connectivity, 6th among nine ASEAN countries, according to a recent study in Global Mobile Experience.

Furthermore, in the hands of telcos, the 4G rollout has overlooked low-density residential areas and rural areas, creating a massive digital divide where those outside urban areas only have a success rate of 44% in their 4G connection compared to 83.7% for urban areas.

High mobile service cost, disappointing mobile connectivity ranking regionally and globally, and declining network quality were drivers for the government to implement change in order to drive forward the vision for a new Malaysian digital economy.

Therefore, the government has decided to establish a single entity to accelerate nationwide 5G deployment and adoption, with the objective of supporting Malaysia’s transformation to become a regional leader in the digital economy, and to promote a more inclusive society.

On the 1st of March, the Finance Ministry announced the establishment of DNB, as the Special Purpose Vehicle (SPV) for Malaysia’s 5G rollout.

DNB is wholly owned by the Minister of Finance (Incorporated) and is licensed under the Communications and Multimedia Act 1998 (The Act) to provide wholesale 5G coverage and capacity to other licensees under the act.

The 10-year cost of the DNB-led 5G rollout is estimated at RM16.5 billion, which will be fully funded by the domestic financial services sector based on the DNB business model.

5G is an economic imperative and essential to ensure Malaysia’s digital competitiveness.

To achieve 5G coverage of 80% in populated areas in 2024, a feasible and comprehensive model is required to accelerate the deployment and adoption of 5G technology.

This is where a supply-driven Single Wholesale Network (SWN) was selected and for good reason.

The SWN model of Digital Nasional Berhad (DNB) will allow for a more inclusive rollout with increased network coverage in rural areas. Contrasted with the demand-led and profit-driven focus of the 4G rollout by telcos, DNB concentrates the effort on efficiency by optimising existing infrastructure.

The pooling of 5G spectrum in a single neutral entity like DNB will allow for much greater spectral efficiency (as opposed to spectrum as a scarce resource being divided between multiple parties), and thereby allowing DNB the ability to provide 5G wholesale services at lowest cost.

We will continue to support the government’s aspiration to deliver 5G for the nation. We believe that we are well positioned to support the 5G rollout for the country.

The Digital “Superhighway” Towards A 5G Smart Future

Imagine a wide digital highway that enables all online user data to travel freely and without any interruption, this is the technology of a Multi-Operator Core Network (MOCN).

Built as a single, seamless digital “superhighway”, this secure network will support all telcos equally on a wholesale basis – at potentially less than half the cost it would take for telcos to deploy 5G themselves.

The MOCN model was successfully demonstrated on 10th of November with the integration of 5 telcos, which was witnessed by Communications and Multimedia Minister Tan Sri Annuar Musa as well as several industry leaders.

The 5G price to telcos is expected to be at less than 20 cents per GB, which is less than half of what it would cost the telcos for capacity generated by their own 4G infrastructure.

The cost savings will benefit the industry by increasing free cash flows, which could be utilised for cost-saving optimisations, or investments into new industry verticals and revenue growth opportunities.

Consumers will benefit from the cost savings as well – as telcos would charge lower rates for 5G services than they currently charge for mobile services.

Question:
What was the basis in the decision to speed up the 5G process?

Answer:
Malaysia is already behind our neighbours in terms of 5G network availability. Singapore, Indonesia, Thailand, Vietnam and the Philippines have already launched their 5G networks as early as 2019.

Any further delay in the development of the 5G network will impact our economic competitiveness and thus impair our national development agenda.

Question:
Why is a company fully owned by the Government, and not the private sector, tasked to roll out 5G?

Answer:
Because of the importance of connectivity for the growth of the digital economy, the Government took decisive action in February 2021 to announce the Malaysia Digital Economy Blueprint (MyDIGITAL).

One of the primary actions taken under MyDIGITAL was the establishment of a Special Purpose Vehicle (SPV) named “Digital Nasional Berhad” (DNB) to accelerate the 5G rollout, based on a cost-recovery model.

Question:
As DNB is a new entity, what track record is there to compare with telcos who have been in the game for a long time?

Answer:
DNB was established from its first day to be staffed and managed by industry veterans and private sector specialists.

Question:
Why is it that no telcos have signed up with DNB at the moment?

Answer:
For telcos to be able to sign with DNB, a Reference Access Offer (RAO) must be published in accordance with the Mandatory Standards of Access.

Question:
Will the implementation of the 5G network be a monopoly and hence restrict competition?

Answer:
The telco industry is not subjected to the Competition Act 2010 [Act 712] by the Malaysian Competition Commission (MyCC).

Accordingly, there is no issue of non-compliance with the Competition Act or abuse of market power to carry out activities that are anti-competitive or monopolistic.

The issue of competition in the telecommunications industry is regulated under Act 588 and not under Act 712.

Strict regulation is imposed by the MCMC as the regulatory body for the communications industry. In this regard, the Communications and Multimedia Act 1998 provides an adequate regulatory framework to regulate DNB activities. These include, among others:

Question:
How will DNB be governed?

Question:
Can you tell us how much this will cost the Rakyat?

Answer:
While DNB is owned by the Government and regulated by the MCMC, we are financed by private-sector financial institutions as per the agreed business model of DNB.

There is no requirement for any funding by the public sector or the government.

Question:
Where will the funding come from and how much will the Government be spending at the expense of the Rakyat?

Answer:
The deployment of the 5G network will cost RM16.5 billion over 10 years  will be financed through a mixture of deferred payments to vendors, trade and working capital financing, and a Sukuk programme that will be raised in the domestic debt capital market.

DNB will secure the requisite financing from the financial services sector including banks, which it will then subsequently repay from its wholesale revenue generated from the sale of wholesale capacity.

As such, no Government funding, guarantees or development expenditure for the rollout will be required.

Question:
Why do we need 5G at this moment, when our 4G promises haven’t been met?

Answer:
The COVID-19 pandemic has brought into sharp focus the importance of digital technologies and underlying demands for connectivity.

That demand is only expected to increase with time, and Malaysia’s telco infrastructure needs to be able to meet this demand.

Question:
Was the tender process open and if so who was it open to?

The process began with the initial evaluation of fourteen (14) Network Equipment Providers (NEPs), after which, eight (8) were shortlisted and invited to bid for the tender. There were 4 final bids received.

The tender requirements were based on criteria identified and refined through a rigorous process with industry feedback on the requirements of the 5G network and shared with all invited NEPs.

Question:
There have been recent discussions with GSMA during a webinar and there were a lot of concerns over the SWN model, any comment?

Answer:
In the case of Malaysia, the Government has enabled DNB to provide 5G wholesale services at the lowest possible cost for the benefit of the industry and customers: