My honest thoughts on the Samsung Galaxy Z Flip3 after using it for 10 days. 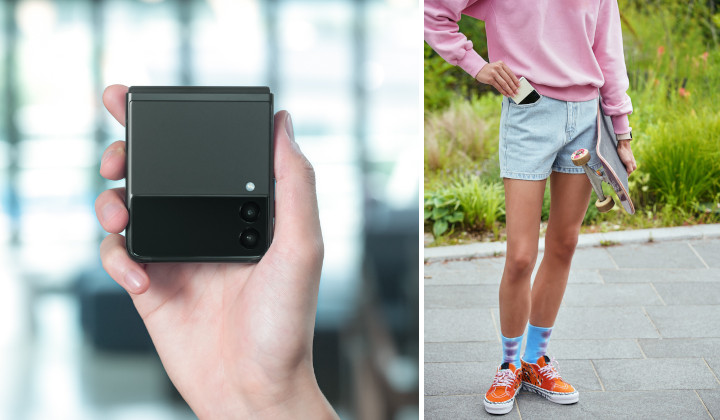 While most smartphone makers say that they make exceptional smartphones, Samsung does it.

Although they stumbled at first, the third generation Samsung Galaxy Z Flip3 is proof there is still room for innovation.

In a market where every other Android smartphone is only differentiated by its chipset, interface, and marketing spiel, the Z Flip3 stands apart.

Samsung did more than just take a 6.7in smartphone and fold it in half.

If all the numbers seem confusing, remember, generally the bigger the better. Also, this is a Samsung flagship phone, which means it is fitted with the best the company has to offer.

Previously I wrote on my first impressions of the Samsung Galaxy Z Flip3 5G a mere four days after I started using it. There I went over the unboxing of the device and its initial setup process.

These are my opinions after using the Z Flip3 for 10 days.

The Z Flip3 is a smartphone for those who don’t want to live behind a screen. It is for those who want to be in the moment, undistracted, while still staying connected.

There is so much you can do using the cover display single-handedly. You can check notifications, control music, pay with Samsung Pay, and even take photos and videos all while the phone is still closed.

Opening the Z Flip3 requires you to use both hands. Making engaging with the phone a conscious decision. It physically separates the moment you are in and the temptations of the phone.

This use flow alone, I feel, makes getting a Z Flip3 worthwhile.

So, imagine someone likes your post and left a comment. The Z Flip3 dings, you palm the device and without losing a beat, read the message on the cover display, get that dopamine hit, and ignore it in style.

In an instant, you return to what you were doing. There is no need to engage, nor the temptation to scroll through feeds.

Then you and your friends bump into a celebrity. You palm the Z Flip3, ask for a selfie while double-tapping the power button.

Before anyone else could take out their phone, you raise your arm with the phone in your palm, swipe right to switch to the ultra-wide lens, use the cover display to frame the shot and fit everyone in, and tap it to take a photo on the best camera on the Z Flip3.

All before anyone could unlock their phones.

That’s the speed and power of the Z Flip3.

What About The Photos?

To my eyes, the photos taken using the Z Flip3 are perfect for sharing. The colours are punchy, especially with greens and oranges.

However, for photorealistic pictures, I would tone down the colour saturation. I also prefer the natural look of the rear camera compared to the face tuned front-facing camera.

Here are some samples:

Keep in mind that these photos have been resized for this page. Also, the quality of these photos are subjective. If it looks good to you, it is good enough.

The UX Can Be Further Refined

I did not doubt that the Samsung Galaxy Z Flip3 would deliver flagship performance. Its unique form convinced me that the Z Flip3 is the smartphone to get if you are in the market for a flagship Android smartphone.

However, because it is packed with all the features and the kitchen sink, the user experience can be clunky. You will end up not using all of the features the Z Flip3 has to offer. And that’s OK.

This is somewhat alleviated by how Samsung’s One UI staggered the introduction of features. It does not flood the user with everything that it can do, instead unveils them through the course of using the device, like a tutorial in a video game.

Still, some features that should work together feel like they work in silos. For example, when I set my bedtime in Samsung health, it does not automatically put my devices in bedtime mode because that option is in Digital wellbeing and parental controls.

The Samsung Z Flip3 5G will be released on 22 September. It comes in 7 colours and prices start at RM3,999.

Samsung is always bundling their latest and greatest with promotions so check out the Galaxy Z Flip3 5G page for the most recent and upcoming offerings.