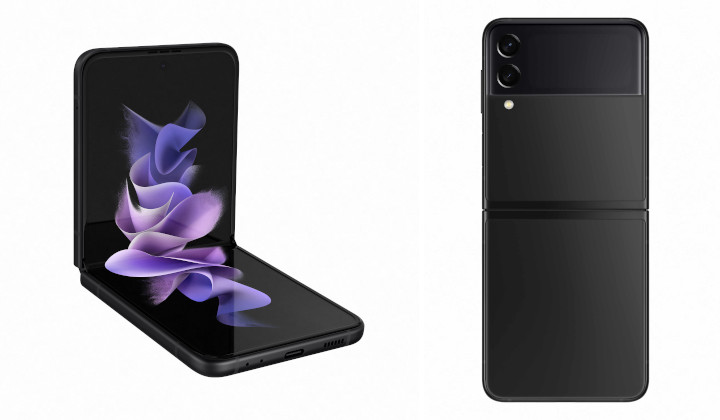 An antithesis to the Galaxy Z Fold3 5G, the Galaxy Z Flip3 5G is Samsung’s latest most cutting edge offering for the fashionable, the popular, and the stylish.

I’ve had my hands on one for the past 4 days and here are my initial impressions of the fun and compact feature-filled Android smartphone.

From its black understated and eco-friendly packaging to the moment I held it in my hand, the Galaxy Z Flip3 5G did not betray its fun side.

The model that I got was in phantom black, which is one of the seven glorious colours available.

In the box, it looked like any other smartphone in the market, a glass and metal slab that is narrow and long.

But, that changed when I picked it up and flipped it closed. This is no ordinary smartphone, it is also my first foldable.

As the name implies, the Samsung Galaxy Z Flip3 5G is the third iteration of the Flip. By this time Samsung knows what they are doing and it shows. Everything about the Z Flip3 is solid, from the build to the folding mechanism. Nothing about it makes me question its quality.

Although I have yet to explore the full user experience of the Z Flip3, every design decision Samsung made seems to make sense. I look forward to using that cover display more.

Furthermore, its folded form is so compact you could forgo pocketing it altogether and carry it like a wearable. Personally, if I had one of the official Flip3 cases, the one with the ring, I would attach it to a carabiner and hang it from my everyday carry bag or a lanyard instead.

Setting up the Galaxy Z Flip3 is simple and it works even if you don’t have accounts with, or do not want to log into, Google or Samsung.

Follow the instructions carefully and you can even pick not to install all the extra apps you might not need.

I, however, chose to install all the apps and log into my accounts just to see what I would get.

Overall, it is not so bad, not all of the apps installed are unwelcome.

I also choose to install and update all the default and optional apps before starting to use the Z Flip3. That took a while.

In the meantime, I wanted to charge the Z Flip3, but it only came with a USB-C to USB-C charging cable. No USB-C adapter in the box, so if you don’t have one then you’ll have to buy one.

In the next few days I’ll be testing the Samsung Galaxy Z Flip3 5G with some of the most common apps and put it through its paces in everyday scenarios. We’ll also do a photo and video shootout and see how it fairs.

Look out for a full review of this fun flip phone coming soon.