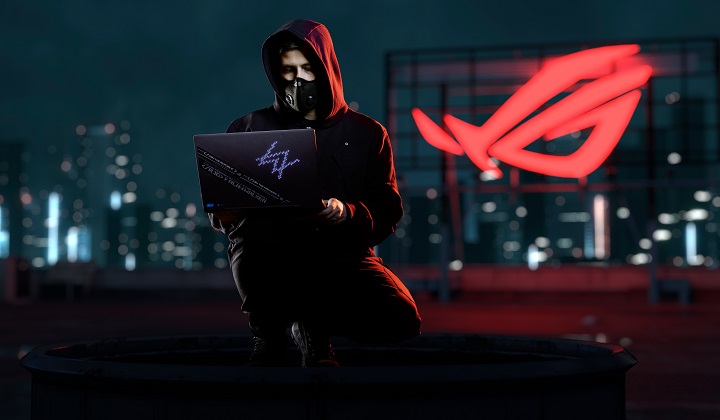 So who is Alan Walker?

Alan developed an interest in computers, programming, and graphic design at a young age, eventually leading to a prominent career in electronic music.

He was a self-taught producer releasing tracks on YouTube and SoundCloud. He broke through the music scene with Faded in 2015.

As an artist, he had his hands in producing tracks for PUBG Mobile, and Death Stranding.

What about this new Zephyrus G14 Alan Walker Special Edition?

The ROG Zephyrus G14 laptop on its own has power and performance in a portable package.

Inside is an 8-core, 16-thread AMD Ryzen 9 5900HS CPU and the NVIDIA GeForce RTX 3050 Ti GPU. The former translates to processing power for creatives and the latter means high-end graphics for the gamers. All in a laptop that weighs 1.7kg.

What makes the Zephyrus G14 AW SE special are the unique colour accents, the Spectre Blue AniMe Matrix LED array on the laptop’s cover, and Alan’s signature next to the ROG logo done in the same shade of blue that shifts in tone when looked at from different angles.

There are also two fabric belts laid diagonally across the lid that adds a cyberpunk flair to the whole machine.

But that’s not all. The laptop features a custom boot animation and Alan Walker wallpaper.

The glass touchpad is shaded with a customised pattern and the keycaps match Alan Walker’s signature colours.

The A and W keys feature the producer’s logo.

The box that the laptop comes in turns into the ROG Remix sampler when connected to the G14 with a USB Type-C cable. The conductive pads on the surface of the acrylic box allow users to trigger 18 of Walker’s own sound effects.

Built For The Better: How 2-In-1 Computers Are The Future