It includes the first, and fastest-ever magnet wireless charging system for Android. 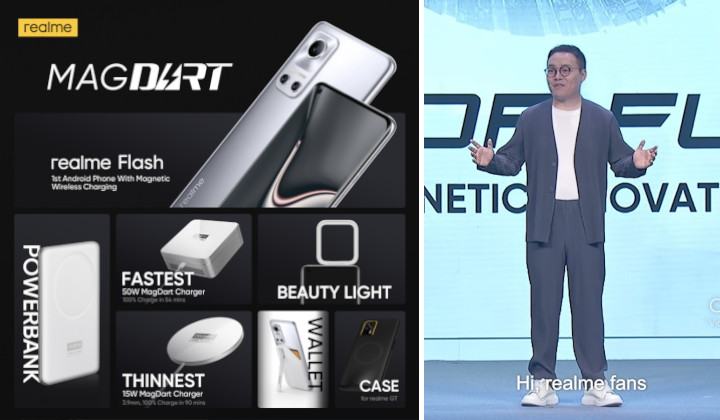 A smartphone with a circular array of magnets that can be used to attach wireless chargers and other accessories is probably something you have heard before, but probably not on an Android device.

The folks at Realme want to change that with the introduction of the MagDart, a magnetic ecosystem of chargers and accessories for their Android smartphones.

The hero of the lineup is the Realme Flash, the first Android smartphone that supports MagDart.

It will have a 4500mAh battery and can support the 50W MagDart wireless charger, which is said to be able to charge the battery to full in less than an hour, almost as fast as the Realme 50W SuperDart wired charger.

However, little else is known about the upcoming smartphone.

Hailed as the world’s fastest magnetic wireless charger, the 50W MagDart Charger is said to be able to charge a phone wirelessly and keep cool even when the smartphone is in use.

To get the full potential of the 50W MagDart Charger it has to be plugged into the 65W SuperDart wired charger.

We don’t know how quiet the fans are but there is a cooling system inside the 50W MagDart Charger to keep the mainboard and charging coil at operating temperature.

Although Realme says that it is as fast as wired charging, they have not said anything about its efficiency.

This charger is touted as the thinnest magnetic wireless charger at only 3.9mm thick. It achieves this by separating the board from the coil and placing each on either end of the cable.

According to Realme, the 15W MagDart Charger can charge the 45000mAh battery of the Realme Flash, from flat to full, in 90 minutes.

It comes in two parts, the magnetically attachable power bank and a stand. When combined, it becomes a wireless charging stand that can charge both the power bank and the smartphone at the same time.

Of course, like the original it is based on, the MagDart can be used for more than just charging.

However, Realme took the concept further with accessories that are powered wirelessly by the smartphone.

The MagDart Beauty Light is a selfie light with 60 mini LEDs and dedicated controls. It attaches directly to the smartphone and is powered by reverse charging.

The MagDart Wallet holds up to three cards but also has a kickstand.

In an interesting twist, Realme also revealed the GT MagDart Charging Case that adds MagDart charging compatibility and some bulk to the Realme GT.

If you find any of these latest techs from Realme interesting, too bad because they did not announce availability nor pricing for any of the products mentioned.

That said, expect to see the same tech being adopted by other Android manufacturers, like Oppo.

MagDart is novel for Android and could be a staple in the future if there are no competing standards to muddy the waters.