Malaysia uses the UK or Type G plug, because of colonialism and also because it’s great! 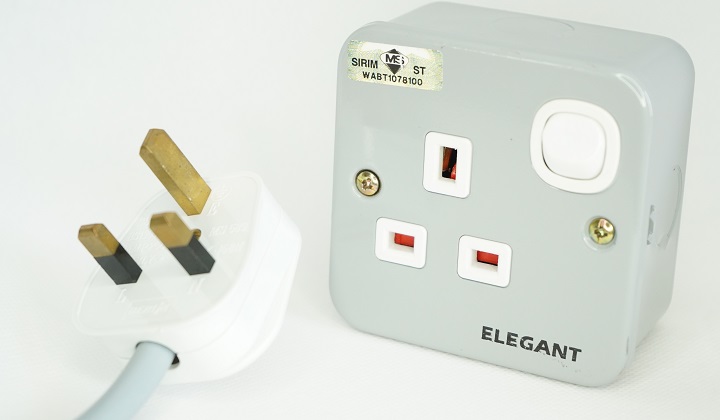 In the late 1800s, while the electrical revolution was going on in the United States, led by Nikola Tesla and Thomas Edison, Malaysia was still a British colony know as Malaya.

As the world transitioned to utilising electricity more and more, our little colony adopted its electrical practises from Britain.

In fact, our plugs are typically referred to as The British Plug or the Type G, and because of our shared history of British colonialism, places such as Singapore and Hong Kong also use the same power plug.

Compared to its Australian, European and American counterparts, our plugs have several distinct safety features, which many electrical enthusiasts around the world applaud.

The first and main safety feature is the shutters on the power socket. It can be quite difficult, for instance, for a child to poke the socket with something and get a shock.

For that to happen the earth (or ground) pin, which is the top pin that is slightly longer than the bottom two, needs to be plugged in first, allowing the shutters to come up and electricity to flow.

It would have to be quite a resourceful baby to manage to plug something into the earth opening and then something else into the live and neutral openings in order to get a shock.

In fact, these shutters are so effective that so-called “Safety Socket Covers” are actually MORE dangerous.

One more feature is that our power sockets have switches, which are easy to take for granted and forget, but many of our Australian, European and American counterparts do not have this feature.

A simple but effective feature of our plugs is the insulation around the live and neutral pins.

If you were to only plug it in half-way, the metallic parts of the pin are not exposed, which could give you shock if you were to get your finger caught in-between them.

Opening up the plug you can see another safety feature. Each plug head comes with a built-in fuse which became standard because of World War 2 when copper was in shortage.

It was more economical and safer to require a fuse in every plug and make a building’s electrical circuit as one loop of cable going around the house, instead of having many individual wires branching out from a junction box.

Inside the plug, you can also see the three wires. They are the earth (or ground) wire at the top coloured green (or sometimes green and yellow), the brown live wire which is fused, and the neutral wire which is blue on the left.

The earth wire, while under normal operation, isn’t utilised by the electrical current. It’s there as a return path to the ground and, should something go wrong electrically with the appliance or the plug, this wire will ground the current safely away from shocking anyone.

Without this any conductive appliance, like a metal toaster, could ground the current through your body, or even through your heart causing it stop.

Yet another safety feature in the design of this plug is the slack in the earth wire. If the cable was pulled out, or if something should go wrong and the wires fray, the live and neutral wires would be pulled out before the earth wire.

So in the event of damage or fraying, the earth wire is likely to have grounded the current before anyone gets hurt.

Downsides of the UK/Type G plug

While all-in-all, it is a triumph of design but there are one or two exceptions.

The first being the size of the plug which is quite bulky, making it one of the worst to have on a charger that you might need to carry around.

Additionally, if you don’t cover the hard metal pins with a plastic sheath, they could scratch or damage things as they shift about in a bag.

The second exception is that because of its shape, if the plug falls on the floor, it will almost always end up with its pins pointing upwards.

This makes it quite a hazard because if you step on it on the dark, it’s really REALLY going to hurt.

“I Wanted To Bring It To Life”: When A 91 Year-Old Architect Meets A 150 Year-Old Cognac