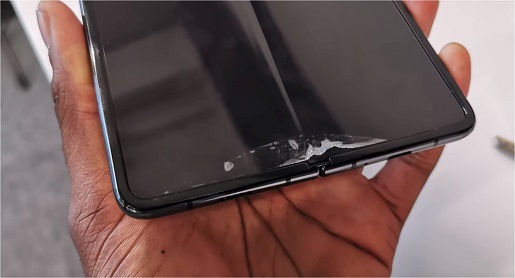 There’s been a significant amount of uproar by tech reviewers about the Samsung Galaxy Fold breaking within hours or a day of being unboxed.

But Marques Brownlee of YouTube channel MKBHD can explain the reason behind this plague on the phone that took Samsung 8 years to make.

Spoiler warning! He reveals that the plastic screen protector that comes attached to the Galaxy Fold is not an accessory but a necessity.

He did partially removed the plastic cover on his sample Galaxy Fold but stopped when he realised he had damaged the device.

He also laments that a warning should have been included in the packaging for review samples though it apparently appeared in the commercial units.

Dear future #GalaxyFold owners, I know I always say “No one ever read the instructions”… PLEASE READ THIS ONE!!!

(This is the wrap over the screen of the Galaxy Fold) pic.twitter.com/LuQPRfDZIE

But Brownlee also suggested that warnings such as these should be bigger than just a mere fine print.

Samsung has also issued a statement on the matter.

A limited number of early Galaxy Fold samples were provided to media for review. We have received a few reports regarding the main display on the samples provided. We will thoroughly inspect these units in person to determine the cause of the matter.

Separately, a few reviewers reported having removed the top layer of the display causing damage to the screen. The main display on the Galaxy Fold features a top protective layer, which is part of the display structure designed to protect the screen from unintended scratches. Removing the protective layer or adding adhesives to the main display may cause damage. We will ensure this information is clearly delivered to our customers.

Samsung’s Official statement as posted by The Verge.

Meanwhile, look at Joanna Stern’s Galaxy Fold that has started gathering dust at the corners of the ‘protective layer’ after she pulled it away a little but stopped.

Same though I had started to peel this yesterday not knowing and then it got worse today pic.twitter.com/jzETs0mCR3

But, like Brownlee, we’re feeling optimistic and rooting for the phone to only get better.

Besides, Samsung too does not appear to consider the Galaxy Fold a failure as the Korean company is continuing with its plans to launch the Fold to the public.

For Malaysia, that will be on May 3rd.

Not quite an open-and-shut case huh?