While visiting Malaysia, her favorite local dish was beef noodles, though. 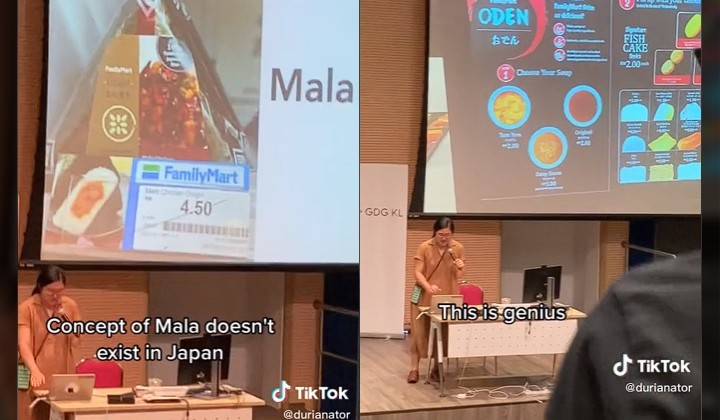 To “spice up” her presentation at DevFest Kuala Lumpur, Google Chrome Web Developer Mariko Kosaka decided to share her thoughts on the localized food at Malaysian Family Mart stores.

Like Family Mart, Mariko originally hails from Japan, though she is currently based in New York City.

“I went to get snack at Family Mart before my talk and found the onigiri section interesting. I’m originally from Japan so I do check out Japanese convenience stores whenever I see them in a different country,” she said when contacted by TRP.

In a clip, which was shared on TikTok by user @durianator, Mariko is heard commenting on the onigiri section of the convenience store, saying she was unsure of the Mala Chicken and Crawfish onigiri as, in her words, Japanese people “can’t do spicy food” and they don’t eat crawfish.

A picture of a Garlic Mayo Shrimp onigiri that she shared also had three question marks next to it.

But Family Mart Malaysia’s Oden section fascinated her. Sharing a picture of the menu, she said, “This is genius.”

“Oden in [the] Japanese context is like a very simple bland fish broth, but like Tom Yam sauce and Satay sauce?! This is genius. You should import that back to Tokyo. You will do really well,” she says before getting back to work.

“I always try to make my presentation more engaging,” Mariko wrote in her replies to questions by TRP.

“Forty minutes is a long time to pay attention to technology and code on slides. It is totally unrelated to my actual presentation, but the aim of the onigiri review part was to “wake up” the audience after the lunch break,” she said.

She also said New York City has a few Malaysian restaurants so she was already familiar with local staples like Roti Canai and Nasi Goreng, among others.

I need mall food in US to get on this level. (Nasi Goreng at food court in KL) pic.twitter.com/i0vJdM0ixl

When asked if there was something she found especially delightful on her visit, Mariko said one dish stuck out for her: Soong Kee Beef Noodles in Lot 10.

“This beef noodle is not in NYC,” she said, adding that she “LOVED” it.