Halab Gate and Damascus BBQ are some of the places in Bukit Bintang where you could get good shawarmas. 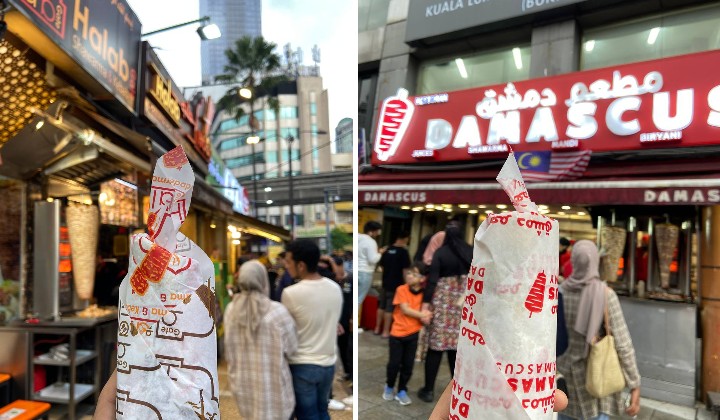 Bukit Bintang is known for a lot of things, especially food. In the heart of KL, there are plenty of interesting and novel foods such as wagyu beef skewers, 32cm parfaits, shawarmas, kunafas and many more.

They also have an Arab street called Jalan Berangan over there where you can find a lot of Arabic food and shops. You can find a few good shawarma places here.

READ MORE: 5 Places For The Best Shawarma In KL

Although there are many, but I decided to try the two shops that found extreme popularity online called Halab Gate & Damascus BBQ. Just wanted to know what the hype is about.

I went there on a public holiday around 4 pm and there were only 3 or 4 people in the line.

I asked the vendor the most recommended one and he said it was the chicken or the mixed chicken and beef shawarma. I thought I should taste the best of both worlds so I got the mixed one in regular size for RM12.

They’ll give you the receipt with your order number on it. Just wait for your number to be called and then you can straightly take it away. There are seats in front of the Arabic store nearby so you can probably sit there for a while or eat the shawarma on the spot there.

As for the taste, the first bite was kinda dry and bland. But as I got to the middle, the sauces became more intense and there was a lot of meat. The meat was juicy and flavourful. I love the chicken parts as they were crispy and tender at the same time. The herb was not so overpowering and the sauces just tasted a bit sour like yoghurt.

They also gave a white condiment called Tahini in a little container. It tasted a bit bland by itself because it’s basically just ground sesame seed sauce. However, it goes really well with the shawarma. It just adds this lip-smacking creaminess that I really like.

After I bought the shawarma at Halab, I just went across the street to Damascus and ordered the same thing. There weren’t that many people at the time.

I also got a mix of beef and chicken shawarma. Accidentally, I got mine with the cheese. The person taking the order was so encouraging I couldn’t say no. It’s like going to Starbucks or Mcdonald’s, determined to say no to the size upgrade but eventually saying yes because it’s a habit.

So I got the regular-sized one for RM17. He said the cheese was RM2 so that makes the original regular mixed shawarma RM15.

You can choose a spicy or non-spicy option. I got the non-spicy one because I’m kinda afraid of what Middle Eastern spiciness would taste like. I chose the safe side. Next, they’ll give you an order slip and will call your number once your order is done.

The taste of this shawarma is slightly more flavourful and herby than the other one. It gets juicier in the middle as well. They also provide a Tahini sauce which complements the shawarma. The meat bits were even more thinly sliced so I guess that’s why it’s even more flavourful.

As for the volume of meat, I’d say Halab is more generous with it. Damascus ones had even thinner slices so maybe that made the shawarma smaller but indeed it was more flavourful than Halab’s.

Personally, I would give Halab a 7/10 and Damascus a 6/10. Halab was better for me because of the brownie points (cheaper and bigger). But well, you gotta try them both to truly say for yourself.

Make sure you eat them while they’re hot. Only then can you enjoy the crispness of the grilled bread and the warmth of the meat. I had to take it away and bring it back home to eat it so it was kinda cold. I reheated it on the pan to get the bread crispy again and it was definitely better.

Actually, I wanted to know if they would give shawarma with extra meat on top like the viral ones but I guess that’s for influencers. And you’re going to take it away anyway so better wrap it safely. If you want the pretty ones, probably give the vendor a little *wink wink*.

If you have a few changes to spare, get the ones with the cheese. You won’t regret the decision.

As a true Malaysian, I’d like shawarma more if it were spicy but it is indeed a Middle Eastern food that should be eaten that way so I can’t complain. They’re filled with herbs that I’m not a fan of but when in a Middle Eastern place, do as the Middle Eastern do.

So if you tried both of these shawarmas, which one do you prefer? Is there an even better option that we should know about?