Local vegan restaurant SALA has come up with belacan, which is fermented shrimp paste, completely vegan. 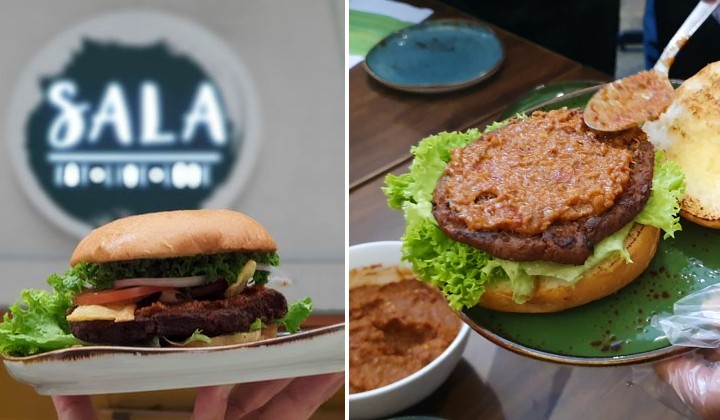 Belacan is one of those things that you just can’t get a good substitute of. The pungent aroma of fermented shrimp paste is a truly Malaysian condiment that is deeply loved and lends a unique taste to food.

The ingredients of belacan are shrimp and salt, which is then left to ferment multiple times until it is a literal brick of powerful umami. So how did it end up in a burger, and a vegan one no less?

Fauzi Hussein, the founder of the vegan restaurant chain SALA Malaysia, explained that he hasn’t had belacan since turning vegan 5 years ago. In fact, he had resigned himself to giving up many of Malaysia’s most delicious tastes… until the birth of vegan belacan, made by experimenting with Phuture Food’s new vegan seafood products.

Paired with a plant-based patty from Phuture Food, the Belacan Burger is said to be a treat for the taste buds yet is completely meatless. We tried it out.

The burger itself is actually really simple. You’ve got the basics of buttered toasted bun, lettuce, tomatoes, onions, with a plant-based patty. The interesting stuff is the belacan spread on top of the patty and the deep-friend tortilla chips for an extra crunch.

The burger itself tastes pretty basic at first bite. Then, the flavour of the belacan slowly releases as you chew and you get a pretty strong flavour after a while.

There is no doubt that the vegan belacan smells and tastes exactly like what you’d expect from belacan. For a vegan substitute, the accuracy is impeccable.

It has the strong powerful smells of belacan and spicy base notes that linger on your tongue.

The patty itself was a touch on the dry side as it was cooked in an air fryer instead of grilled traditionally, but the texture was indeed like a beef patty.

However, thanks to the rest of the crisp ingredients like the lettuce and tomatoes, the flavour of the belacan gets balanced out with some freshness, and the tortilla chips gives it a nice crunchy texture.

If you are a belacan lover, you should give this Burger Belacan a shot just to try it out and wonder in amazement that it’s completely plant-based. If you’re vegan, you should certainly give it a shot too just because you probaby haven’t had belacan in a while.

I doubt people would realize that the burger is vegan because it certainly tastes very much like the real thing, with real beef and real belacan. Yet, it just goes to show that where there’s a will, there’s a way. If vegans really want to eat belacan on a burger, they’re going to make one from scratch.

And they might want to bring their meat-eating friends along for the ride who will enjoy it just the same.

The Burger Belacan is a limited-time menu item in conjunction with our national day holidays and they are available at all SALA outlets (except for SALA Avenue K). Best pick one up to try before it’s gone!