The Lukamades chain selling Greek doughnuts began in Australia and expanded to Indonesia and Malaysia. 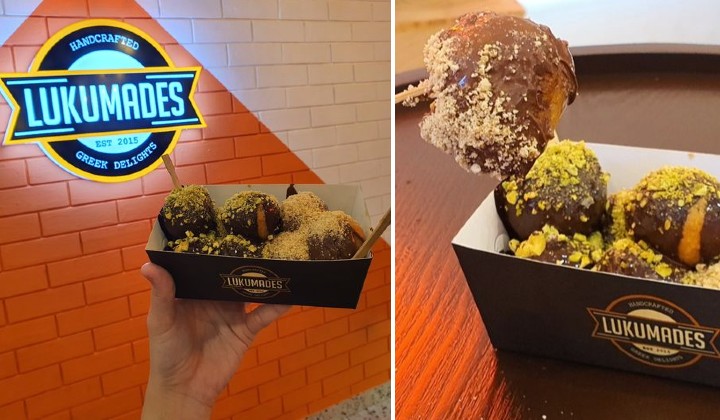 Loukoumades are a popular Greek dessert commonly described as Greek donuts with honey. Now, we get to try it for ourselves in Malaysia with the opening of Lukumades, an Australian chain that has made its way to SS15, Subang Jaya.

Lukumades serves fried dough balls with a modern twist. Instead of more traditional toppings like honey and chopped nuts, Lukumades instead gives you “modern” sweet toppings like Nutella, matcha, hazelnut, Lotus Biscoff, Oreo, and more. You can even add on a scoop of ice-cream over your doughnut balls too!

Their offerings are simple: Each box of doughnuts come in a set of 10 balls with up to two different toppings of your choice.

I tried a box of ten balls with two toppings: Nutella and dark chocolate with pistachio, both coming highly recommended. Matcha was also one of their popular flavours, according to the server.

The dough balls were freshly fried upon order in an open kitchen you can see from the seating area. Then, the balls are portioned into boxes and the hot dessert sauce of your choice is drizzled over the whole thing.

The balls themselves are beautifully crispy on the outside yet chewy and soft on the inside. In terms of texture, I find it closer to fried mochi than a typical doughnut, as it has some elasticity in the dough. However, I really enjoyed that the dough balls were not as oily as I expected.

The sauce is quite typical of dessert shops, but they’re certainly generous with the amount given. Even if you roll the dough ball around for maximum sauce saturation, there’s still a good amount of sauce left at the end, perfect for those who just really like their sweet sauces.

If you enjoy visiting new places for its pleasant ambience and a comfortable dining experience, then Lukumades certainly hits the spot with its bright interior design and colourful vibes.

Tables are smallish with plenty of space, which makes it a great place for couples or small groups to gather over some sweet balls.

Portion-wise, I find it more comfortable to share a box of 10 especially after a full meal, but those with a sweet tooth will probably be able to finish a whole box on their own.

A box of ten balls with 2 different toppings will set you back RM22, but the price is slightly cheaper when you get just 1 flavour if you already know exactly what you want.