Noodle Mansion’s Nine Grades by Siow features all 6 of their noodle bases, in soup or dry, that you can try. 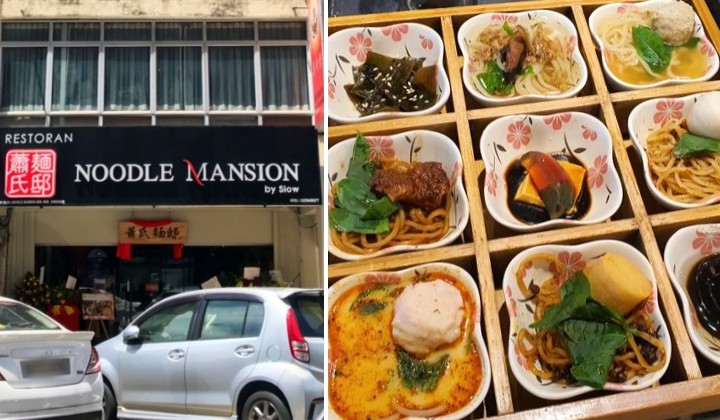 The menu for the restaurant is rather basic: they only serve noodles. You are encouraged to customize your own bowl of noodles, choosing from 6 bases: 3 different kinds of soup or 3 flavours of dry noodles, together with your choice of topping and type of noodle.

However, if you are indecisive about what to eat, then there is also the Nine Grades by Siow ‘tasting platter’, which features all 6 bases omakase-style, so you don’t even need to choose!

Naturally, the Nine Grades by Siow is a good way to try everything that the restaurant has to offer in one dish.

The special dish comes in a grid platter of 9, including an appetizer, a mid-meal palate cleanser, and a dessert. Then, the remaining dishes will consist of signature soup, special soup, signature sauce, fish chili sauce, ma lat soup, and ma lat sauce respectively paired with your choice of noodle.

You’re supposed to eat from left to right downwards, starting from the lighter flavours of the signature soup and ending with the heavily-flavoured ma lat sauce.

I found that the soup bases were all significantly more enjoyable than the dry sauces, being full-bodied and well-flavoured. In particular, the ma lat soup stood out for its savoury fragrance. It was not very spicy at all with a milky soup base, and its depth was reminiscent of laksa with a mala flavour.

I chose the thin noodles and found them to be quite firm and very chewy, with a similar mouthfeel to ramen. It feels just shy of al dente, but still quite enjoyable nonetheless. Perhaps the texture might be improved if everything was just hotter. Instead, probably due to their small portions, the noodles went cold very quickly and turned chewy.

Although the portion here looks small, with each small grid enough for just 2-3 bites, it’s still a significant amount of noodles and you’ll definitely walk away full. Even their usual noodle order looks small, but that’s just a visual trick due to the absolutely massive bowls.

That being said, I was mildly disappointed that there were not many options in terms of toppings. Almost everything, save for the minced meat and a piece of braised pork, were processed meats such as bursting meatballs, lobster balls, imitation scallop meat, and there were no vegetables other than pucuk manis and dehydrated mushrooms.

That being said, if you like noodles and enjoy a bit of fun with your food, Nine Grades by Siow is certainly a visually impressive dish and a relatively affordable exciting meal out at RM20.90. Otherwise, a regular bowl of noodles will set you back closer to RM15, depending on what toppings you get.