The new menu is another play on fusing traditional Japanese flavours with flavours around the world. 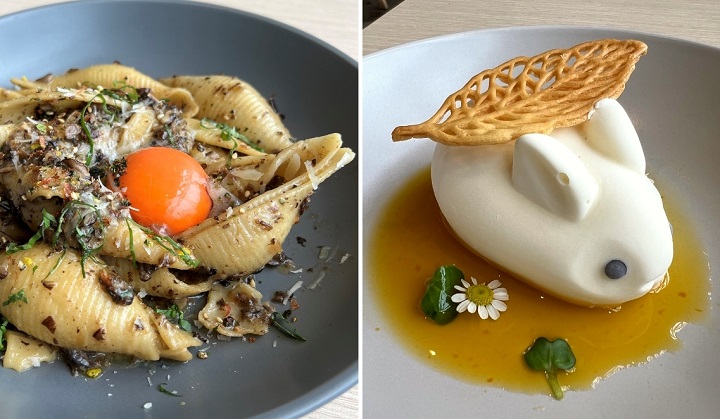 CC By Mel promises to keep things fresh and exciting for its customers. To keep to their promise, they recently launched a new menu to tickle everyone’s taste buds and continue to surprise us with their creativity!

I was soon back at the restaurant in Bukit Jalil to try out some of the new dishes they have lovingly cooked up.

The saltiness from the smoked duck cubes complements the taste of the applewood smoked salmon and balances out with the truffle aligot.

If you love the taste of truffles, you should try the dish that’s aptly named the Truffle Puddle V2.0. The first thing you’ll notice about the dish is the big pasta shells.

As someone who loves eggs, I loved having the rich egg yolk mixed in with the mushroom bits and stuffed them all inside the shells before taking a bite.

The taste of truffle can be overpowering for some people but it isn’t the case in Truffle Puddle V2.0 and the mild flavouring balances the rest of the dish well.

For small bites, the delightfully simple mixture of ingredients in the Angus Truffle Bikini surprised me. Sandwiched in between the brown buttered toast are beef slices and brie cheese.

I was glad to find that the beef slices were tender and not stringy so each bite was heavenly. After enjoying a few bites of the sandwiches, I realise it tasted very much like a pizza (it must be the cheese).

The second snack we tried was the Una Nori. The Una Nori sports the unique fried taco-like seaweed shell that holds up the rest of the ingredients inside. It’s packed with unagi bits, truffled eggs, avocado, furikake, tempura nori, rice and topped with ikura.

Compared to the other dishes we tried, the Una Nori was also good but came off a little plain. Despite that, it’s still a tasty light snack if you need to get something to go.

Since we were back for the second time in CC By Mel, we thought it would be a good idea to order the Angus Don again to see if the standards hold up. We’re happy to report that the Angus Don still tastes delicious.

READ MORE: CC By Mel – Are The Food And Drinks As Good As Its Presentation? [Review]

We also tried a seafood spaghetti dish called Ebithi Ebi. It has an interesting, mild taste with plenty of fish roe to give the dish some texture.

The most interesting drink of the three was the Popcorn Latte. When it comes to caramel popcorns, there’s a chance that it can be too sweet.

Fortunately, the sweetness of the drink was balanced well enough so you can still taste the bitterness of the coffee. The refreshing drink is topped with mini marshmallows too.

People with a sweet tooth will find the Brown Sugar Earl Grey pleasing enough because it’s not super sweet like most brown sugar drinks are. The Icy Salt Latte lives up to its name and it’s not overpowering flavour-wise either.

After having a sumptuous meal, we ordered two of the new desserts – Pistachio Brownie and Tropical Alice.

Pistachio Brownie has a hard shell exterior with a rich dense chocolate in the centre. The dessert is topped with strawberries, pistachio ganache and edible flowers. The strawberries gave a burst of sweetness to the dessert.

Tropical Alice has got to be the cutest dessert I’ve ever seen. The white rabbit is made out of coconut sorbet. Right at the core of the adorable sorbet is a refreshing combination of sweet and sour tropical fruits such as passion fruit and mango.

The dishes we tried are only a fraction of the new offerings in CC By Mel. More dishes will be added to the new menu soon so keep an eye out for them!

Getting to CC By Mel

CC By Mel is situated in a row of shops in Bukit Jalil. Customers can park outside the restaurant or opt to park their vehicles in the basement car park.

You can also park in Pavilion Bukit Jalil and take a 5-minute walk to the restaurant. It’s pretty much a straight road ahead from the entrance with the Golden Rooster.